Since there's not a lot happening just now by way of sales (galleries mostly closed, shows cancelled) I've been spending some time redoing some older pieces.  Sometimes there'll be a piece that I almost like but something seems a bit wrong.  Often it takes me a while to decide just what it is that I don't like, or, once I figure that out, how best to fix it.  Sometimes it just takes a small tweak and sometimes a major redo.  Here is one of each: 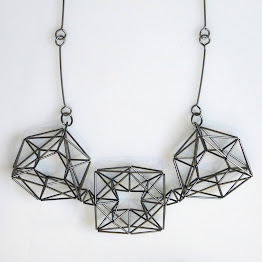 When I made this pendant I had just figured out the square and circle (hexagon actually) shapes, and I've used them several times since.  So I liked the shapes, but I didn't quite like the shape of the pendant--too wide and flat, sticking out way beyond the chain.

One of the recurring problems I have is that I make individual units, often not knowing just how I'll arrange them till after I've made several.  Then when I've decided I have to attach some sort of rings in the proper places as attachment points.  I could do this easily with open rings, i.e. ones that  aren't welded shut. But since I have thread at each joint, my worry is that a thread will find its way through the inevitable space where the 2 ends of the ring meet.  So I always want a closed ring.  But a closed ring has to be put in place as you're building the structure, and you often don't know where you'll want the 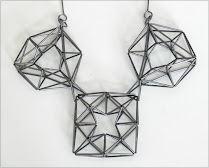 join to be.  In the first iteration I joined the shapes by putting a pair of tetrahedrons between them.  But that meant I had to join them at the places where the edge of the shape was a crosswise tube, not a point.  And that made the overall shape of the piece so long and wide. For the second version I came up with a way to join a point on the square to a crosswise tube on each circle and I like that better. 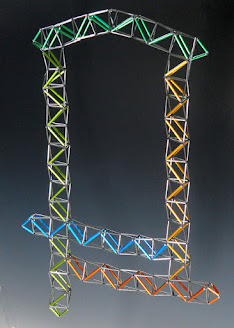 The second redo was a complete rethinking. I've always liked the colored piece shown first.  But it had some problems.  The colored tubes, which are anodised aluminum, are quite a bit bigger in diameter than the silver ones, and I've always felt that those bigger openings at the end of each tube were a problem.  Early on, my solution was to put a seed bead at the end of each tube and treat the bead-tube-bead as a single unit.  However, that triples the joints, and creates that many more places where if the thread tension is just a bit off the piece gets looser.  In general that method tends to make the structure much less firm.This piece has been around for a few years, and there were starting to be places where you could see thread between ajacent beads in a way I didn't like.The other problem is the structure puts a lot of  "stuff" at the back of your neck.  I used to be quite rigid about maintaining a structure all the way around the back, which can make them harder to wear, especially when, as here, the structure is relatively wide and flat.  A rounder shape going around the back works better. 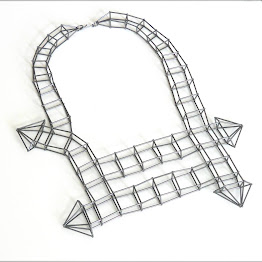 The problem I had, though, is is that without the seed beads at each end,the colored tubes were too short to make octs that wouldn't zigzag, and I wanted them to run straight.  And I can no longer get those aluminum tubes, so I couldn't cut longer ones.  I could have cut a whole set of silver tubes in custom lengths to make the existing colored tubes work.  Instead I redid the whole thing in RAW and eliminated the color.  While I was at it I made the arrow heads more pronounced, added an extra arrow, and made the necklace one unit narrower and the back more wearable.  I like it  a lot, but I still miss the color, and I'm working on a way to do the new design in octahedrons with color.  More on that later.