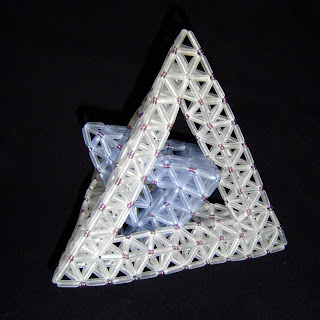 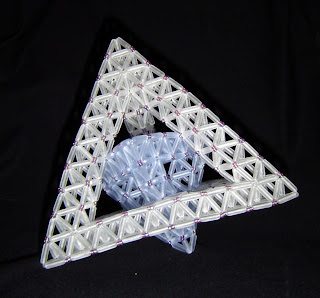 Back to geometric beadwork. I started this tetrahedron piece a while ago and sort of bogged down in the middle of weaving it. But I really like it now that it's done. I have 2 pictures because it's hard to capture the 3 dimensionalness in a picture (at least with my level of skill at photography). The problem is that the last thing you do is add the little lilac seed beads along the edges and that does alot to firm up the structure because it is a straight piece of monofilament running down each edge. So all the time you're making it it's way too floppy, and there's no way to know till you're done whether it is going to firm up enough to make the whole piece work. I had made a considerably smaller version, but, of course, as you get bigger, you tend to get floppier. Fortunately it did firm up quite nicely, and made a good piece.
I ought to add that the beads are around 15mm long, and the large tetrahedron is around 7" on a side, although it isn't in front of me now, so I can't measure it.
Posted by Emilie at 5:20 PM 1 comment: 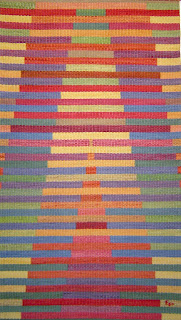 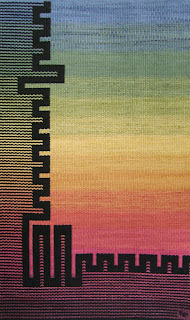 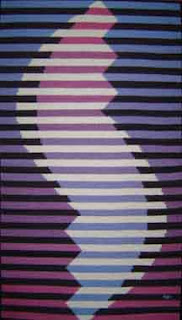 Designing with color is so much fun! Last year I did a big dying sequence and got a whole rainbow of colors, which I blogged about at the time. That resulted in 2 rugs, the 1st 2 you see here (also blogged about before). From the really enthusiastic response I got (and, I must admit, from the quick sale of both rugs too) I decided to do another rainbow dying. This one was a bit different, in that my yarn wasn't natural white, but sort of honey colored. On the other hand, in the earlier dying I had cut my colors with a bit of brown or black in each dye stock to keep the colors just a bit muted, so this time I did more or less similar colors, but without the brown dye since the yarn already had a bit of brown. After 2 days of dying I had pretty much what I had planned on.
I decided the first rug would be similar to the blue/purple/black/white one I did a few years ago(#3 pictured above), which I thought was a really great rug. Only instead of the colors just shifting from blue to plum, the outside would go from yellow to blue, and the center figure would go from yellow to red.
That was the plan. But as I looked at the yarn hanging on the fence to dry, I kept being drawn to the blue-turquoise-green tones. This morning I changed the whole plan to one that's much more muted, in those tones plus the honey yarn that I still have alot of. No pictures yet, but I'll post a picture when it's done.
Posted by Emilie at 2:52 PM 2 comments: