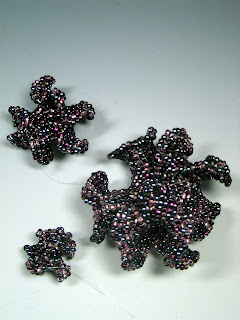 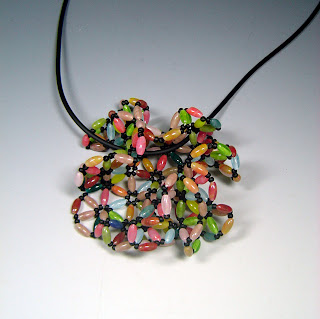 The first image (actually they're switched and it's the 2nd) was my first hyperbolic plane. It starts with 1 heptagon in the middle. The second layer puts 7 heptagons around it. The 3rd layer is 22 heptagons around. The 4th layer would have been 56 heptagons, but after I had done some of it I took it out, because, as I said in the earlier post, the piece was sticking out too far from the body for a pendant. It was nicely ruffly however.
I can't quite figure out the math for why the progression is 1,7,22,56. The first 2 numbers are obvious, but then it got wierd. I keep thinking maybe there's a stray octagon or hexagon somewhere, which would screw up the counting, but if there is I haven't found it. Another possibility just occurred to me. Maybe I just counted wrong, and the 3rd number is 21. It gets really hard to keep track of which layer is which, and it seems like they should all be multiples of 7. Oh,well...
The 2nd picture is the ruffle that starts with a tube and gradually flares out till it gets ruffly. This came from reading about all the crocheted coral reef forms. I loved how the engineers were trying to create the ruffles by scotchtaping bits of graph paper around in a spiral, adding 1-1-1-2 (you can change the algorithm by varying the number of 1s between each 2) and it was really cumbersome. Then one of the female engineers realized you could do the same thing with crochet stitches, and it would be far easier, and would represent it better too. I used a ladder stitch instead of crocheting. As I remember, some of the forms are 1112 and some are 112 (these start to ruffle faster and go really crazy really quickly).
Anyway, I like these, and someday I'll get around to doing something with them, but I probably won't make any more, as they take a loooong time.
Posted by Emilie at 2:26 PM 1 comment: 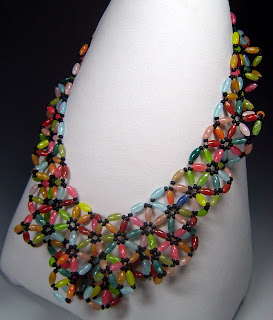 Haven't posted in a while, but experimentation goes on. This is a piece based on the hyperbolic plane. If you tile with hexagons, you, of course, get a flat plane. But if you tile with heptagons, you get a hyperbolic plane, which gets rufflier and rufflier as you move outward, like some heads of cabbage. The first one I did was round. I intended it to be a focal piece for a pendant, but it sort of got too 3-dimensional too fast (i.e. it stuck out too far from the wearer's body). I'll try to get a picture of it up in a day or so, but I don't have one now. Anyway I decided I wanted it long and narrow instead, so it would get ruffly, but not TOO ruffly. You could also do this using circles of 7 beads for the heptagons, but I wanted more "there" there, so I made my heptagons out of 7 triangles.
There's another way to get a ruffly structure that starts with a tube instead of a plane (maybe a hyperbolic cylinder? I actually have no idea what I'm talking about here). It comes out looking sort of like a petunia. I made a few of these quite a while ago, and liked them, but never quite figured out what to do with them. I think they should probably be the ends of a sort of a rope necklace, but have never made it. I'll try to get a picture of these too. They're much less open than these plane structures, so they took a long time to do.
Posted by Emilie at 11:53 AM 2 comments: