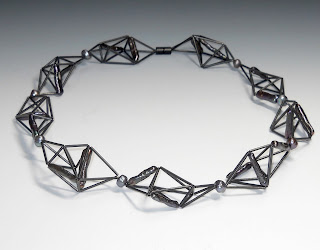 I went to a bead show several months ago.  I don't get to do that much, as I live in the boondocks, so I do most of my bead buying online.  It's so much fun to look at actual beads.  Anyway, I saw these dark stick pearls, and thought how great it would be to mix them in with my oxidized copper tubes.  They've been sitting in a bag for a while, but I finally got it done and I like the result.
Another thing that I liked here was the photography.  2 things I did differently:  I used a flash, which I usually don't do, but it lightened the shadows alot.  Also I took the picture from a very shallow angle, which brought out the 3-dimensional-ness of the piece.
Posted by Emilie at 2:19 PM No comments: 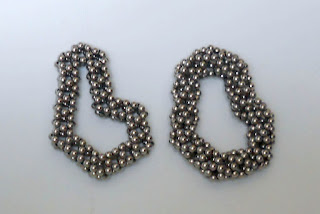 This turned into a fun project/experiment.  I wanted to create a focal piece for a pendant that was asymmetrical. Something sort of porkchop shaped was what I had in mind.  The part I felt would be hardest was the quick 180 degree turn I wanted at the top.  Looking at some of my earlier samples, I found a way to create it.  From there it was pretty straightforward to create the first shape in the picture.  But it wasn't quite what I wanted.  I had wanted a curvier, rounder shape, not just a series of hard 120 degree turns.  This led me to look again at tubes and shapes I had made in the past.
I knew, although I hadn't thought about it too much, that there are 2 different ways to make a tube out of hexagons.  They can be aligned either point-top or flat-top.  That is when the tube itself is pointing up and down the hexagons in it can either have a flat side up or a point (vertex).  The one on the left is made of flat-top hexes.  This is a bit counterintuitive, as they look pointy at the top.  In just the same way, when you do RAW, a "square" (4 bead circle) made with round beads actually looks more like a diamond than a square, and you have to remind yourself to think only of the thread path, which is indeed a square.
Anyway, if you do a flat-top tube the beads appear to align lengthwise and accentuate the squareness of the tube (in both cases the tubes were made with a 4-hex circumference) and the hardness of the angles. So I decided to try to create a similar shape using point-top hexagons.  With point-top hexagons you get the appearance of rows of beads aligning around the circumference of the tube.  As I expected, I couldn't get as tight a bend at the top (I'm sure there's a way; I just haven't found it yet), but I got a much rounder tube and a more fluid, organic shape.  All in all, more what I was looking for.
Posted by Emilie at 10:49 AM No comments: 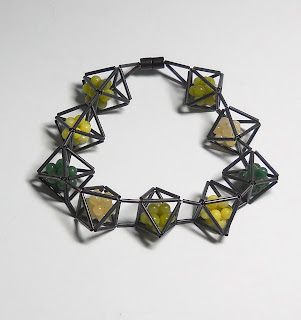 I love the idea of a bead or beaded shape caged within another shape, loose enough that it can move around but not get out.  I did it once with seed beads.  It was a bright colored dodecahedron caged inside a clear buckeyball.  I liked it but have never done another.  These oxidized copper tube bead shapes are ideal for that kind of treatment, and it's been on my to-do list for a while. an individual large bead caged in a structure would be nice, but you'd want it to be undrilled, so not really a bead at all.  I've thought of a marble.  Problem is I only have access to 3 sizes of tubes (and one is quite short, to it's effectively 2 sizes), so you need to be able to size the inside piece to the cage, so that it's small enough to move, but not so small it can fall out. 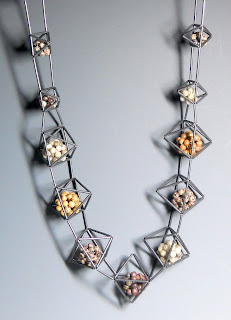 Patricia Madeja does a really nice pendant with an undrilled pearl captured in a gold cube.  But I can't use a cube because a 4-sided shape isn't rigid when done in tube beads.  Also the sizing between the sphere and the square has a pretty small tolerance.  I found the same to be true if I used a tetrahedron cage, i.e. if it was big enough to not fall out it couldn't move much.  An octahedron, though, worked really well, as you can see.  There's lots of  room for the inner balls to move.  In the bracelet and the back of the necklace I used RAW cubes inside octahedrons made of 12 mm tubes.  In the front of the necklace I used dodecahedrons inside 22 mm shapes.  All the inside shapes are made from 4 mm stone beads.
There was just one minor problem with the necklace.  The point of the oct is toward your neck as you wear it, so it feels just a bit prickly.  It's not bad; I wore it all day, but I noticed it just  bit.  After this picture was taken I added a small bead at the inner and outer points of the octs, but it didn't really change anything.  It's not any sharpness in the tubes themselves that creates the slight prickliness, but just the shape of the oct itself.  It wasn't noticeable at all on the bracelet, where the weight is evenly distributed. Both pieces are quite lightweight, it's just that in the necklace whatever weight there is is concentrated in 4 points on your neck.  2 possible answers: reposition the octs so that there's a triangular face toward you instead of a vertex; or leave out the octs at the back of the necklace altogether.  I'm experimenting with both.
Posted by Emilie at 11:34 AM 3 comments: 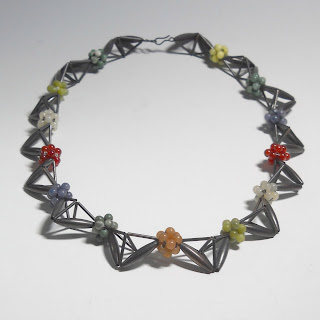 I'm enjoying this combination of the oxidized copper tubes and multi-colored stones.  I don't do much that's dainty or "feminine", so for me this was a bit of a change.  Admittedly most people wouldn't think of oxidized copper tubes and 4 mm stone beads as exactly dainty, but for me it is, just because it's relatively small shapes, symmetrical and it's a short necklace.  Not a choker, but quite a bit shorter than I usually do (it's a bit over 18").  Another example of trying to get beyond just designing for myself.
I spent a bit of time with the photography here too, and ultimately I'm not too happy with it.  A lot of the problem is that the shadows of the tubes are pretty much the same color as the tubes themselves.  Partly, I think, that's because it was a dark and rainy day today, so even in front of a window there wasn't much ambient light beyond the 2 lights I have for photography.  It made the lighting too harsh I think.  I find these pieces hard to photograph, though, because if I put them on a white background it gives it a harsh look, but as I go toward a darker background, the tubes don't show up as well.  Biba Schutz is a wonderful jewelry artist who mostly works with very dark oxidized silver, so I'll have to look at her website and see what her pictures look like.
Posted by Emilie at 2:10 PM No comments: 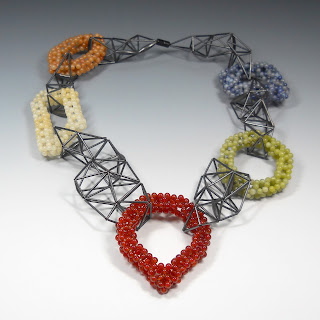 Just finished a new piece.  I've been moving toward adding more color to my oxidized copper tube pieces, mostly with gemstones.  This is the latest.  I have a tendency to design for myself--i.e.something I would wear (or sometimes something I would wear if I lived a life that included dressing up, which I mostly don't).  That keeps the work relatively conservative.  This one is a bit bigger than I would tend to wear myself, but I like it a lot.  I think the mix of stone shapes based on molecular structures  and copper tube structures based more on engineering forms works well.  Particularly since it corresponds with the mix of color and no-color.
I think my next step will be to combine the 2 kinds of beads more closely--like a polyhedron where some of the beads are round gemstones and some are copper tubes.  This is tricky because generally the long beads need structures made mostly of triangles, or else they're too floppy, and I tend to avoid triangles with the round beads.  That's partly because too much thread shows in a triangle made from 3 beads, and also because I like the more open look you get with bigger circles of beads.
Posted by Emilie at 10:35 AM No comments: