I've been working on a few pieces based on a new structure built of tetrahedra (tets).  A lot of my necklaces are more or less chains of either octahedra or tetrahedra.  A chain of octs is relatively straightforward, because octs have opposite sides that are parallel to one another, so you can line them up end to end.  The trick there is to get the chain to curve, so as to make a necklace.  But with tets it's more difficult,  Because no side is parallel to another.  Still, I've managed to come up with 2 different chains of tets that create curves that can become necklaces.  But, I wanted something that was more complex than a simple chain.
The question is whether you can tile tets in 3 dimensions.  The simplest is a group of 5 tets forming a sort of pentagonal circle (how's that for inexact terminology?), i.e. the shape pictured here.  It seems to work, and I'm sure I read that Archimedes, or one of the other big-time Greek mathematicians, 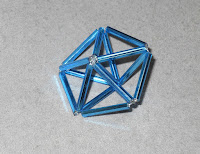 thought that it worked.  Actually, it doesn't quite work; if you make 5 perfect tets sharing a single central edge, there will still be just a bit of space left over.  But as we know, in beadwork, close is often good enough, hence the structure here.  The trouble is that that little bit that's off tends to build as you extend a structure.  If the structure on the left actually worked, you could also make an icosahedron out of 20 tets.  I've done it, but you can tell that all the internal spokes are just a hair too long and tend to bunch up at the center.  Still, I thought I could make the idea work for just a couple of layers before the slight errors built up too far.  So I built this necklace. I like the way it goes from being a chain of single tets on the sides to a more complex structure at the bottom. I broke up the open structure of tets 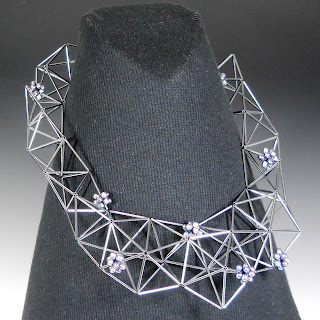 with cubes made of freshwater pearls, and I was pleased with it.  As I looked at it, though, I noticed that there was a line of tubes going more or less straight from the point at the center bottom of the piece all the way up to the back on each side, and that might be another way to accent the piece.
I thought about buying some gold tubes, but decided to do the first experiment with colored aluminum ones.  The aluminum tubes are much bigger in diameter than the silver ones, so I always use seed beads to close off the ends.  I decided to use them at the ends of the silver tubes too.  That made the 25mm tubes effectively 28mm, and so made the necklace a bit bigger, whch I liked.
The one pictured here is actually my 2nd try. 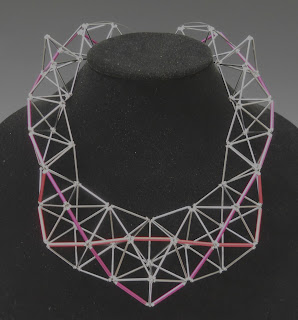 The first time I tried making the line of colored tubes go around the color wheel from red at the bottom thru rose, purple, blue, green etc.  But I found that the blues and greens didn't stand out enough from the dark silver, and so you lost the continuity.  So I stuck with just red.  I also added a second row of red tubes, going crossways at the bottom and then up to meet the long line.  This is actually a pretty lousy picture.  You can't see, for one thing, that the  crossways line is actually a different red from the long vee line.  Also, although I really like the way that black form shows off the shape of the piece, it makes the silver tubes look much lighter than they are.  However that's a problem for another day.

Posted by Emilie at 6:02 PM No comments: 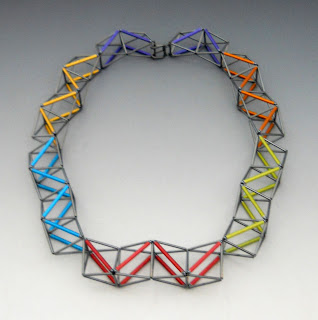 Back in April I did a post about playing with octahedra that had a square shape, i.e. that had 2 sides, in front and back that were basically squares with a long edge forming a hypotenuse.  I showed this piece, with the colored tubes acting as the hypotenuses.  I liked the piece because of the color, and because I liked the squar-ish shapes, but over time I came to think it was just a bit boring.  My work tends to be pretty minimalist, and I like that clean, simple look, but sometimes it's hard to find the line between simple and boring.
I kept looking at the piece, and finally decided it needed  a change.  I wanted to break up the symmetry just a bit.  Actually all I did was add 5 more octs to the red section in the middle, but I thought it made the necklace a lot more 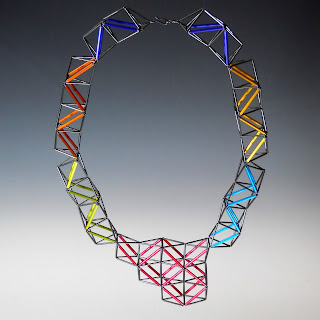 interesting.  And I guess I was proved right because I sent it to a sort of trunk show that I participate in, and it sold the first day.
With that piece gone, I'm working on another one using the square octs with colored aluminum hypotenuses.  If it works out I'll post it when it's finished.
Posted by Emilie at 5:33 PM No comments: