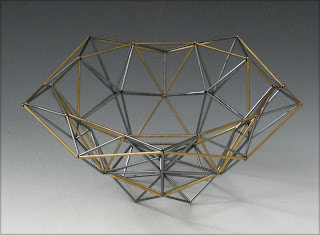 I entered this piece (and 1 other) in the latest Bridges math art gallery (http://gallery.bridgesmathart.org/exhibitions/2021-joint-mathematics-meetings). The exhibit included explanations by the artists of each piece, and it's amazing how explaining your ideas makes you think about them more clearly.  As I said in the explanation this bowl is basically half of an icosidodecahedron, which is made up of pentagons separated by triangles.  I can't make a simple pentagon with my tubes, as 5 tubes joined together with thread will be shapeless.  So I made 5 tets that share a central tube as a hub.  I'll call them pods.  These pods are relatively flat, but if they were thicker, I wouldn't actually need the central tube.  That got me thinking about the fact that without that central tube it would be easy to stellate the structure.  Also that you could do that with 6 sided pods, or, for that matter, any-sided ones. With that idea, I could recreate those interesting structures that I learned from thebeadedmolecules.blogspot.com and that I made using round beads. What fun! 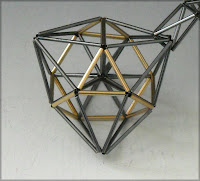 These 3 pieces are what I did first.  The top one is a truncated tet.  The second is a dodecahedron. And the 3rd is a truncated oct.  In each case the actual structure is done in gold filled tubes, and the rest is done in oxidized sterling ones.  I didn't truncate the triangular faces because they're rigid without it.  I wasn't sure if I'd have to stellate the square faces in the 3rd piece (they would stellate into octahedrons). I didn't, and the piece seemed pretty firm as is, so I guess it was OK, although technically I probably should have.  I was pretty careful
not to stellate them too sharply, as you can have a real probem getting
your needle down into the valleys of a piece with tall stellations.  I did 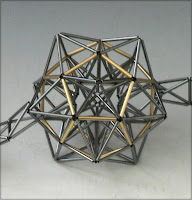 some stellated pieces back when I was working with seed beads and nearly drove myself crazy that way.
Once I had made the 3 pieces, the question was what to do with them.  I had decided on some sort of wall piece, as they're too big for jewelry. My plan was to make a straight truss out of octs and hang them from it side by side.  But the top piece, the trucdated tet, is smaller than the rest, so I couldn't seem to make an arrangement I liked.  Eventually I decided to  hang them in a single row, and the smaller shape looks fine that way.

One last thing I wanted to do:  the icosidodecahedron I had started out 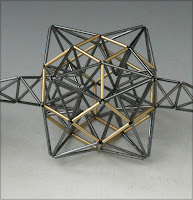 to do in the first place.  It was going to take a lot of tube length, so I didn't want to do it in silver and gold fill.  I found a source for really inexpensive brass tubes in Istanbul (via etsy) so I made it in brass. I stellated more that the others because I knew the triangles separating the pentagons would allow me to get my needle in without a problem.  What I found was that in that case the limit on how steep you want your stellations to be is that if they're too steep that outside point becomes subject to not holding its shape tightly. 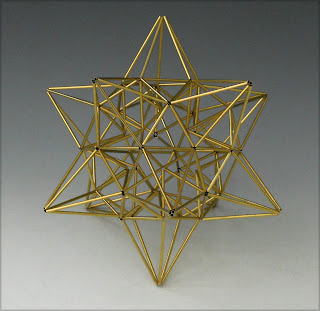