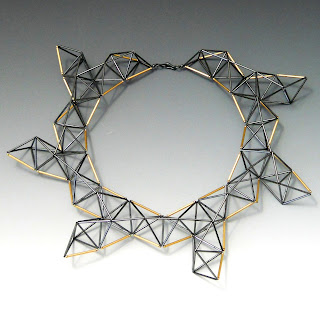 I didn't intend for these redos to become a "thing."  But I did another one and I was so pleased with the results I decided to post it.
This was not a case of not liking the original piece; I actually liked it a lot.  My intent when I made it was to use it as a jury shot, as it was rather big and dramatic.  But I absolutely could not get it to photograph well (and I took a million pics).  The top pic is the best I got, and the gold doesn't stand out against the black well at all.  Also, photographing it straight on like that you don't get a good sense of the 3D-ness and it's hard to judge the size. So even though I liked the piece a lot, it wasn't doing what I wanted it to do.

That wouldn't have caused me to redo it, except for one thing.  I realized after looking at it for a 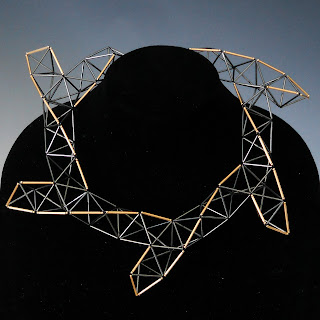 while that it would have been more pinwheel-ish if I had put the arms that extend out right at the points of the hexagon that is the central structure of the necklace instead of in the middle of each face of the hex.  Then it occurred to me that the best way to do it would have been to make a tetrahelix that would be part of the central part of the necklace and then continue into the extending arm.  That would be a true pinwheel. And I rearranged the gold tubes to highlight the spiral better.  Also I'm putting together an application for an exhibit of mathematical art and that would be a much purer mathematical structure.

So I redid it, and was quite pleased with the results.But that still left the photography problem.  I took lots of pics, basically redoing all the mistakes I had made with the original necklace.  Photographing it on the black form was the best way to get a sense of the size and dimensionality. But for some reason that I fail to understand, whenever I did that, even in the same room and under the same light conditions as the other shots, I got a picture that waymore washed out.  Finally, I turned out all the lights, so I only had indirect light from the window, and dialed back the exposure to make it even darker--and it worked.  I think it shows off the piece quite well.  No idea why.
Posted by Emilie at 1:52 PM No comments: 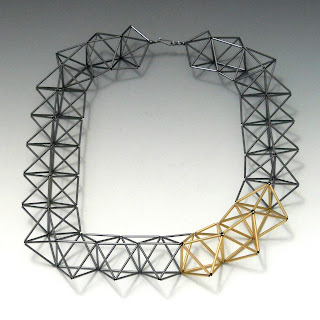 I've been quiet for a while, but not for lack of making jewelry.   Partly, I've been on another canal boat trip in England, but, of course, I took plenty of silver tubes with me.  But since I've been back I've been spending some time redoing som pieces I was never quite happy with.  This is one example.  The picture on top is the original piece.  It's a chain of octahedra and tetrahedra made from a mix of oxidized silver and gold-filled tubes.  While I was making it I thought it was going to be great (I usually do).  But when I got it finished I didn't like it as well as I had expected.  I've stared at it off and on for a few months, trying to figure out what I didn't like. One thing I decided was that the "corner" on the left side wasn't sharp enough and didn't provide enough contrast with the curve on the 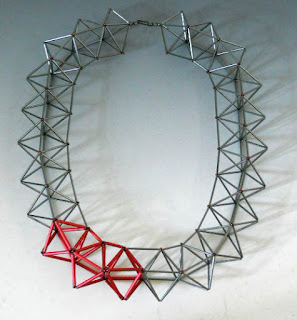 right, so I figured out how to make it pointier.  But then I decided that the real problem was that the piece sort of had 2 focal points, the change in shape on the left and the change in color on the right.  You couldn't quite tell where you were supposed to look.  So I redid it, eliminating the corner altogether.  I also changed from gold-filled tubes to red anodised aluminum ones.  I did this because I'm starting to make some pieces with accents of 14 kt gold  tubes, so it seems too confusing to have gold-filled ones as well.
Posted by Emilie at 8:30 PM No comments: