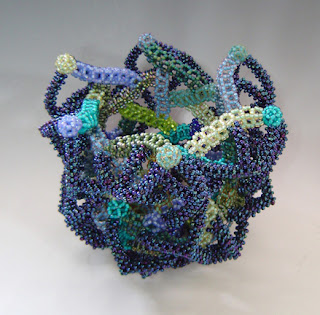 Continuing on my stellated object series. I wanted to do a vessel, and this is my 1st one. I'm already scheming my next. When I stellated the sphere I showed in earlier posts, the most disappointing part was that you could no longer see the actual sphere very well. A vessel solves that problem. In this one I used cubes with sides of 2 beads for the actual vessel, but cubes of 1 bead sides for the stellation. That way you can see the vessel better through the stellation, as well as being able to see into it from the top. On the other hand I sort of miss those big fat stellations. Also, the interweaving of the stellations was more apparent in the sphere because of using several colors. Here I used several colors on the vessel itself, but only the darkish blue for the outside.
When I first did it, I just did the rows of stellated triangles, but it seemed to just stop at the top. It seemed to need a finish of some sort for the to edge. So I added a final row that is geometrically quite different, but brings some of the lighter inside colors to the outside and creates a sort of rim. I like that better.
As you can guess, this sort of piece is pretty time consuming. I don't think I would have the patience if I were using the smaller beads that most beaders do. I've come to realize lately that alot of what I do is related to my use of larger, #8 beads. For example someone mentioned that she didn't like using monofilament nylon because it meant doing it without a needle. I can use a needle, because the holes of #8s are big enough that I can do several passes and still pull a needle and 2 thicknesses of monofilament through. Once in a while I'll have to unthread and poke a single strand of monofilament through on the last pass, but not often. And I can use an easy-to-thread, big hole needle, which makes things faster for me. I sometimes miss the color selection that you get with #11s, but there would just be too many things I'd have to rethink if I were to change now.
One more thing just occurred to me--Since I've been talking about size I ought to mention that the size of this vessel is around 5" x5" x5"( it's not in front of me now, so I can't be exact).
Posted by Emilie at 9:39 AM 2 comments: