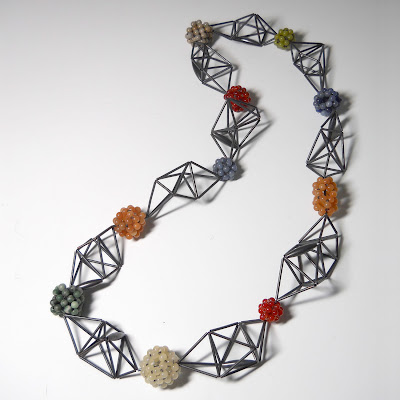 I've been wanting to combine gemstone beads with my oxidized copper scaffold structures.  The first one I did ( I don't have a picture of it) was quite a regular, repeating structure.  Also, it used just one kind of gemstone, and it was gray feldspar, so it didn't add a lot of color.  Anyway, nice, but I wanted something with more unpredictability to it.  This is what I came up with.  It uses red agate, red aventurine, green marble, blue quartz, yellow quartz and gray feldspar.  Also, no 2 scaffold structures are alike.  I think it's much more interesting.  I've never "strung" beads on a cord, so it is more complicated to incorporate the colored shapes with the oxidized copper, but I got it to work. 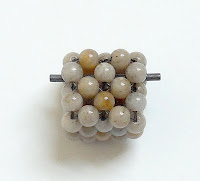 The trickiest shapes to use were the cubes.  Each gemstone shape has a tube bead running through it.  When I made my first cube (they're 2x2x2 cubes) I discovered the only way I could put a tube through it was like this: 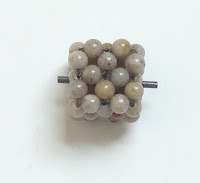 The tube had to go through the middle of one of the rows of cubes, so it's offset on the total cube.  If the cube were 3x3x3 cubes there'd be a path down the middle, but that would be way too big.  But then it occurred to me that this cube, which is made of 54 beads, has just 2 running down each center axis.  So you could just leave out 2 beads, and you'd have one center axis that was free.    So I took it apart and left out 2 center beads, and got the one in the 2nd picture.  I couldn't figure  out a very effiicient path to build it without those 2 center beads, but anyway, I got it done.
Posted by Emilie at 4:11 PM 3 comments: 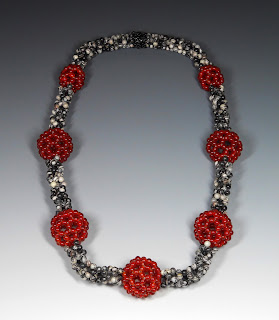 I just finished this piece, and I'm pleased with it.  It's so easy to get hung up on complexity, and I've been guilty of that too.  This piece relies on the color interaction betwen the black and white silkstone beads and the red agate.  Other than that it's simple--just buckyballs and a tube structure.  The only complexity was in making the tube curve at the top and bottom (it has too much stiffness to be able to take that sharp a curve by itself), and that doesn't have the appearance of complexity anyway.
I  work with color a lot in my rugs, and I've always felt that that is one of the things I do reasonably well.  In the rugs, I dye my own colors, and that makes a huge difference.  When I first started beading, I was really frustrated because I couldn't just throw beads in a pot and make them any color I wanted.  So I sort of de-emphasized color, and did a lot of work in a fairly limited palette.   Then, more recently, I've started doing some seed bead pieces with more color, and have liked them.  But with the gemstone pieces, I've still been working in a fairly limited color range, partly because at the moment I'm still pretty cheap and don't buy the more expensive gemstone beads.  Also, I try to stay away from dyed gemstone beads.  I must confess that I have wondered about these red agate beads.  But Shipwreck Beads usually says when beads are dyed, and they don't list these as dyed, so I've been using them a lot.  They punch up a piece nicely.  I wish I could find a good blue too. I'm too cheap, at the moment, to buy lapis lazuli.  I bought blue sodalite once and made a piece that looked pretty nice, but I had so much trouble with the beads breaking that I ended up taking it apart, and I've never bought sodalite since.  Have any of you used sodalite, and what was your experience with it?  I'd love to think I just got a bad batch, but wherever those pretty white inclusions appeared, the bead broke there.  It was as if the white was just chalk.  Any ideas?
Posted by Emilie at 7:29 AM 3 comments: 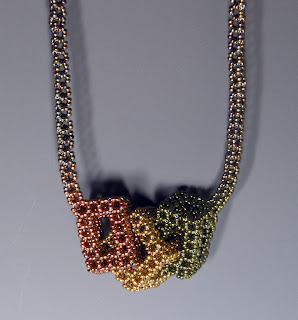 Since I wrote last time about the steps it took me to get to this design, I figured I ought to post the final product.  Quite simple, but I'm pleased with it.
Posted by Emilie at 4:49 PM 2 comments: 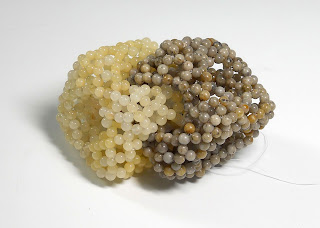 When I was doing the sampler I talked about last time, the hardest thing to figure out was an outside right angle in 2 directions like you have on the corner of a cube.  I tried several ways before I got one I liked.  My plan was to make 3 interlocked cubes, where each outside corner
would turn into a long tube that would go behind the neck to form a pendant.  I wanted it to be pretty big and chunky, for maximum impact.  But by the time I had made 2 cubes using 4 mm stone beads, I realized it was just too big for jewelry (it would have stuck out over 2 1/2" from the body).  You can see in the picture there's still line (fireline) hanging off one of the cubes.  That's because It was pretty complicated and I did lots of backtracking to fix mistakes.  As I finished it up I found 1 last mistake, and haven't yet worked up the ambition to tear out the last corner to fix it.  It's one that only I would notice--but I would notice it. 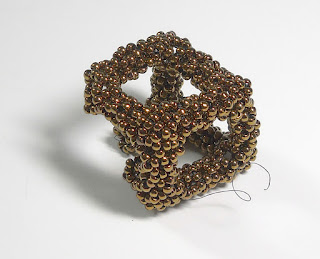 Anyway, I decided to start again, using #8 seed beads in metallic colors.  I've been doing so much work with gemstone beads lately that I had forgotten how much quicker it is to work with seed beads. Hurray for big holes.  So it went quicker and, while still big, it was a better size.  But I found I couldn't get the stiffness I needed using fireline.  It needed to be monofilament.  But as I thought about starting over once again, I thought, wait a minute, I've been making open cubes like this for years--using RAW.  And while I like the sort of organic look of the rounded corners and all, RAW would be SO MUCH EASIER.  One of the things that had gotten me started on the whole project was that when I was trying to make these corners, back in my sampler, I had made one that, while I didn't like it as a plain corner, would be a great structure for morphing into  the long tube structure I wanted for the the pendant.  But I came up with a way to make an "organic" looking connection in RAW from the cube to the chain, and now I'm on my way.  But what a long way around! 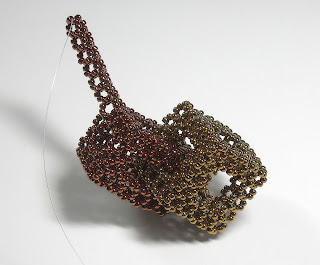