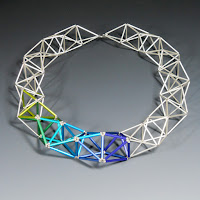 Recently I bought some pearls with holes big enough to slide them over my tubes.  I decided I wanted to make a neckpiece that was a simple series of octs, ornamented by the pearls.  I had made a similar structure using bright silver and colored aluminum tubes a few years ago, and wanted to repeat that structure.  So I went to my handy blog, where I keep track of my structures.  Here's what I found, from August, 2014:  "It's a simple chain of octahedrons.  But a chain of octahedrons would normally form a straight line.  In order to get the curve you need for a necklace I had to make the triangle on the outside edge longer than the triangle on the inside edge.
Here's where some trig would have come in handy in figuring out just how much longer, but I managed to figure it out with "lesser" math, and it came out right."
It would have been really handy if I had written down just what the lesser math had given me so that I could have reproduced the shape.  That, after all, is one of the main reasons I write this blog.  Since I didn't do that I started and ripped apart the new piece over and over trying to get the curve I wanted.  As you can see I didn't get the same curve as last time; it's a little pointier at the bottom and straighter across at the back but I like it OK.  It's also just a bit shorter.  That's only because I was running out of 25 mm tubes, so I did just 20 octs instead of 22.  Then I made the 2 tets at the back by the clasp longer.  Also I now make my own hooks and they're longer than the one I used in the earlier piece.  So the overall piece probably isn't that much shorter, but I do think it's a bit shorter.
So as not to make the same mistake twice I'll put down the plan for the curve.  The outside triangles are mostly equilateral 25mm triangles.  To get more curve I used 28/28/25 mm isosceles triangles at position 1 (at the center), 3, 9 and 10.  On the inside the triangles are either 20mm equilateral or, at inits 1, 2, 3 and 6, to tighten the curve, 20/20/25 isosceles.  It actually doesn't change things all that much.  If I didn't want it to be so pointy at the bottom I could have spread them out more.  Also triangle 6 is an equilateral 25mm oct.  I CHANGED SOME OF THIS AND WROTE ABOUT IT IN THE NEXT POST.
Posted by Emilie at 1:30 PM No comments: