new piece after a hiatus 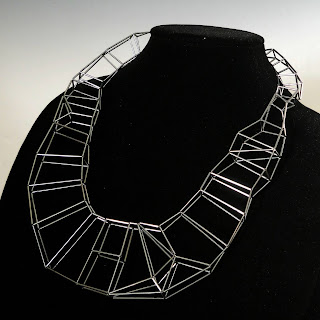 It's been quite a while since I've posted anything here. First there were 2 months on a canal boat in England. Then I came home at the end of October to the aftermath of hurricane Michael.  By the time I got back to Panama City the roads were mostly clear, and we had power and water.  But our house, though liveable, has holes in 1 wall which are only covered with plastic.  Also until a week or so ago we didn't have internet, except for slow data on our phones.  Finally, my computer crashed, taking with it all my jewelry pics as well as the copy of Photoshop that I had used to edit them.  So I've had to learn to use Gimp, which is open-source.  I'm pretty sketchy at it, but I finally got a picture of a piece I like.
I decided to think back over the last 4 or 5 months, pick my favorite piece from that period, and post a picture of it.This is it.  It's done mostly in RAW ( I guess it's technically CRAW, but since that's the only kind of RAW I ever do I don't usually specify it).  But I wanted to break it up, make it less regular than I usually do in my RAW pieces, and I was quite pleased with the way it came out.  I hope you like it. As I get more pictures "gimped" I'll try to post some.  It feels good to get back to normal in one more way.

Posted by Emilie at 3:09 PM No comments: