Some math, some design 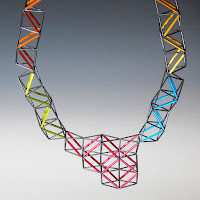 In some earlier posts, I've talked about some necklaces I've made out of octahedrons, where a long tube, often a colored aluminum one, acts as a hypotenuse to create octs that can stack in a way similar to the cubes in RAW.  This works well for necklaces, where it's nice to have the structures lying somewhat flat, but it doesn't work so well in a bracelet, where you would generally want them to stand up.  I needed a way to join 2 standing up octs so they'd be at an angle to each other.  After some trial and error, I  came up with a solution.  If I made an oct so that the triangle on the top used tubes that were half as long as the tubes on the bottom, I'd get an oct that if you looked at it from the top would look like one of the pictures

below, with the little triangle in the middle being the top of the oct and the bigger outside one being the bottom.  And the triangle "walls" that connected them would be perpendicular to the top and bottom ones ( actually there are  are 6 triangles connecting them and every other one is perpendicular.  If I used the pattern on the left to join 2 of my squarish octs, they'd be at right angles to one another; if I used the other, equilateral one they'd have a 60 degree angle.  That's what I used, and started to make the bracelet  shown below.  I was pleased 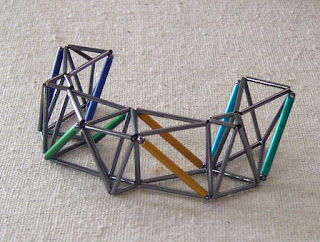 with it from a structural standpoint, but it didn't seem to have enough color, and the aluminum tubes seemed to sort of get lost in all the dark sterling.  I decided that the problem was that the joining octs didn't have any colored tubes, and also that the colored tubes on the inside of the bracelet were kind of lost.  So I took it apart  and moved all the tubes to the outer wall of the bracelet, using them in both the squarish octs and the joining octs.  Both the bracekets are incomplete because I was gradually taking apart the first one to build the second one.  But I hope  they're complete enough that you can get the idea 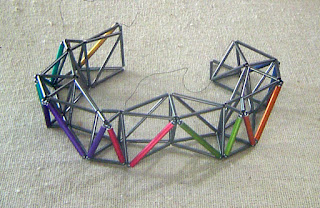 of what they look like.
Posted by Emilie at 6:44 PM No comments: