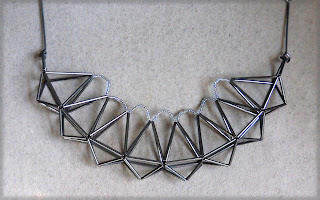 One structure that I totally love is the Rolling Bridge in Paddington Basin, London.  If you don't know it here's a video link www.youtube.com/watch?v=0aIl0bzyQD0.  It's a pedestrian bridge designed by Thomas Heatherwick, and it's just the most elegant structure.  I was telling a friend about it, and suddenly realized that it was a great inspiration for a necklace.  This was also a perfect idea because my husband and I are leaving in a week or so for a month in England.  We'll be up north around Manchester, so I won't actually get to see 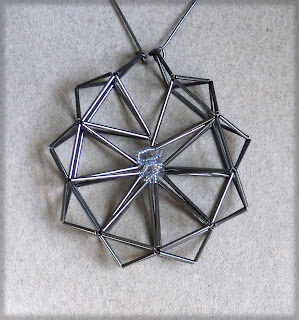 the rolling bridge, but it still seemed just right to have a necklace inspired by a British structure.
This one is  all octahedrons.  Like the bridge, it has 8 sections.  It's not quite finished ( I need to make more chain links, and I've ordered a hook clasp) but when it's done the clasp will be right where the chain meets the "bridge," That way you can hook it to just 1 end of the bridge and it will look like picture 1, or to both ends and it will be rolled up like picture 2.  The only way to get it to be totally straight like the bridge is to hang it upside down, like picture 3, but it's actually a bit long for that (around 7"), so that's mostly theoretical.
I didn't initially plan on using the seed beads, but I was forgetting that if the individual octs are allowed to pivot any way they want they'll tend to hang with the longer, and heavier, beads down.  The bead

chains keep that from happening.  I'm used to using much bigger seed beads, but they would have made the strings of beads much too bulky.  Fortunately, FMG had once sent me a container of #15 beads in just the right iridescent gray, as one of their free gifts along with an order.  I almost didn't keep them, thinking  "what would I ever do with these tiny things?"  But it's hard to throw away free beads, so they were still in my stash, and worked out just right.
That reminds me--if anyone knows of interesting galleries, artist, sbead stores etc. in the Manchester...Liverpool-ish area, I'd love to know about them.  Actually, our mobility will be pretty limited, as we'll be on a narrow boat on the canals up there, but you never know.
Posted by Emilie at 3:48 PM No comments: