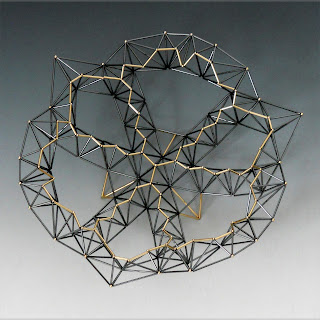 Here's one more in my sculptural series using the tetrahedron series I've been playing with.  I wanted a bigger piece.  This one is about 9" across and 2.5" high. I made the zigzagging tubes on what is usually the outside quite short.  This creates a negative curve and so the zigzag edge is the inside instead of the outside. I have to confess I did this so as not to use so much gold, as I buy it in much smaller quantities.  On most jewelry, bracelets for instance, it's the outside where you want to put the emphasis, but with a bowl form, it's the inside.
Posted by Emilie at 10:24 AM No comments:

Taking it in a new direction 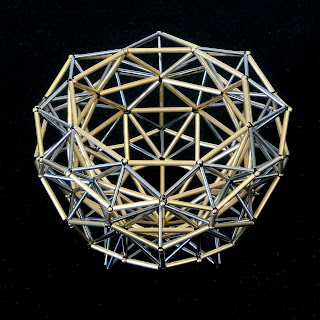 I'm still working on my tet structures, but over the last week or so I've expanded my explorations.  It started out with the idea that I could stack my torus (donut) shapes on top of one another. For example I could make a wider bracelet that way.  But as I stacked a couple of rounds, I started thinking about a bowl form.  That required a torus at the bottom that would angle inward, which was no problem. Then all I had to do was join the octagon I had on the bottom with 8 spokes and add feet to make this little bowl.  It's about 3.5" in diameter, and has gold triangles on the inside. On the outside I had gold zigzags.  I joined the toruses with verticals and so the zigzags became hexagons (which are hard to see in the picture).  For a bracelet the outside is more important but for a bowl it's the inside that shows best.  I'm thinking about more, and bigger, vessel forms.  Also I'm 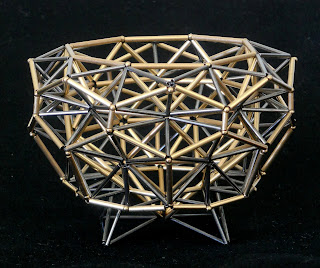 thinking about putting the triangle bases on the outside and the zigzags on the inside. We'll see where this takes me.
Posted by Emilie at 10:05 AM No comments: