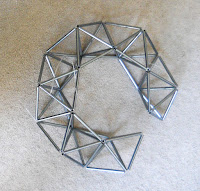 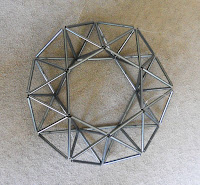 Back in September, I wrote about using right triangles in building tetrahedrons and octahedrons, and how really interesting things happened.  Mostly I was using 20mm tubes as the sides of my right triangles and 25mm tubes with #11 seed beads at each end as the hypotenuses.  Effectively, that made the hypotenuses 28mm.  That worked because to have a right triangle where the 2 sides are equal, the length of the hypotenuse has to equal the side times the square root of 2 (I wish I had a font with a square root sign in it).  So for a 20 mm side you need a roughly 28mm hypotenuse.  I had been cutting my tubes in lengths of 10, 15, 20, and 25mm lengths.  But it occurred to me that if I changed from cutting 15mm tubes to cutting 14mm instead, and added a 28mm length, then each length (except the 25mm) would be a hypotenuse length for the size below it, i.e. I could make right triangles with sides of 10 mm and a 14mm hypotenuse, or 14mm sides with a 20mm hypotenuse, or 20mm with a 28mm one.  I kept the 25mm size too because it's roughly an inch and sometimes my non-scientifically minded brain just reverts to inches.
Anyway that led to lots of playing around with  right triangles.  And here's another place where cool things happened.   I've made several bracelets out of chains of tetrahedrons.   As you can see 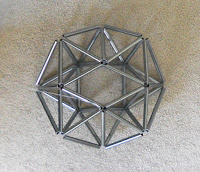 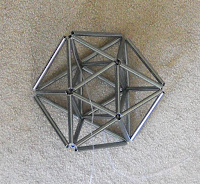 from the first picture it's not a perfect fit.  There's a repeating 4-tet unit, and six of them, pictured here, don't quite come together.  You can pull them together as  in picture 2, where there's a hexagon at the center of the circle.  Or, depending on the length you want, you can force them apart a bit and make the circle out of 7 units with a heptagon in the middle.  I think in my bracelets I've actually pushed them apart enough to use 8 units to make the circle big enough to fit over the wrist.
But anyway, for purposes of this exercise I was acting as if 6 units made a circle.  But then I tried substituting one size longer tubes on some of the outside edges to make the structure curve faster.  In picture 3, I alternated 2 units made all of 14mm tubes with 2 units made of 14mm tubes but with 20 mm tubes on the outside.  I had no idea I'd get anything regular, but it turned out that I got a circle made of 4 units (16 tets).  The figure at the center is a square on one side, the bottom in picture 3, and a diamond on the other, top, side.  And if I made all the outside edges 20mm and all the others 14mm ( last picture) I got a circle with 3 units.
My favorite of these shapes is the 4-unte one, especially because the front and back are different.  I'd like to make a piece using these and using some colored tubes to highlight the patterns on front and back.  Stay tuned.

I've just started playing around with pinterest, as a way to get my work "out in the world" a bit more.  I put up a board with some pieces that have been on the blog before, and some that haven't. I haven't spent much time on pinterest, so I don't know the system too well yet.  Seems like there ought to be labels, like a blog has and like Etsy has so that if someone is interested in geometric jewelry or design, my work might come up, but I don't see anything like that.  Any suggestions? 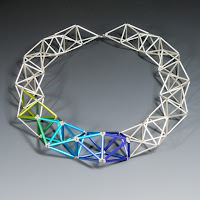 Also, I should mention that one of my necklaces was chosen for the CraftForms exhibit at the Wayne Art Center, in Wayne, PA.  Also, I have work in the Artistry exhibit at the Guilford Art Center in Guilford, CT.  Both of these last into next year.
Posted by Emilie at 8:05 PM 1 comment: