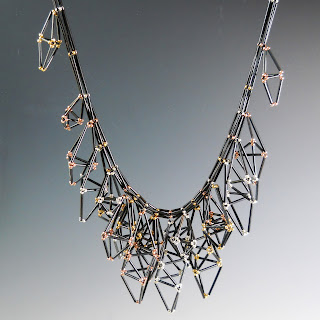 Since I started playing with adding small  (#11) seed beads at the ends of long bugle beads, I've started experimenting with adding them to the oxidized copper tube structures too.  This necklace is an example.  It's a sort of a remake of a necklace I made in late 2011 and posted about at the time (Doing too much, posted in December 2011).  It has quite a different look, though, done in tube beads instead of seed beads.  Much airier and lacy looking.  Also, since the "lozenges" were all the same color, except for different colored seed bead accents, I felt I couldn't mass them as closely together.  So they're spread out more on the RAW chain.  Now I think I'd like to work with more brightly colored accent beads, and see what I get.
Posted by Emilie at 7:08 PM No comments: 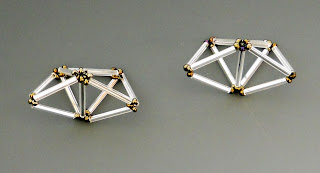 A few days ago, I wrote a post about the trouble I was having making structures out of long bugle beads, because of the sharp edge of the glass bugle fraying the fireline.  Gwen commented saying that when she uses bugle beads she adds a seed bead at each  end of it and treats the group of 3 like a single bead.  I said that might be an answer. Actually, though, it sounded to me like too many seed beads.  I was adding a single bead between each bugle, so as to make a slightly truncated tetrahedron.  The small flat face (a triangle of 3 seed beads) at each point of the tet added a bit of wobble, but not too much.  But it seemed to me, thinking of the first triangle you'd make in the tet, that doing it Gwen's way you'd be adding 2 seed beads between each bugle, and so you'd be adding that many more seed beads, and it would get more and more crowded where several tets meet.  Gwen, I hope you read this, because you were totally right and I was totally wrong.  Turns out that as you keep adding tets, it actually gets less crowded. I can't explain it, so I took a picture.  There are 2 structures, each consisting of 3 tets  The 1 on the left was done "my" way, making truncated tets.  The 1 on the right was done the other way.  Each one has 3 seed beads at each point where 3 bugles meet.  So that by even thought your 1st  triangle has 6 seed beads in it instead of 3, by the time you've finished a whole tet, the total number of seed beads is the same either way.  More importantly when 2 or 3 tets share elements ( in these the bugle bead in the center is part of all 3 tets) the structure done my way has 7 beads at the top and the bottom of that central bugle bead, and you can see they kind of bunch up.  When I did it Gwen's way there are only 5 and it all fits together much more neatly, even using #8 seed beads.    That's good for me, because, especially when I use the 30mm bugles, using #11s at the ends just doesn't look right to me.  To my eye a bugle that big needs a bigger accent bead.  Even here, with 20 mm bugles, I like the 8s. 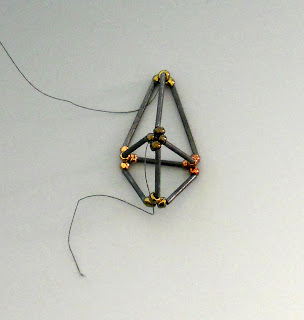 Once I figured that much out, I started thinking of my oxidized copper tubes.  Not that I need to protect the thread there, but I knew that sometimes it would be nice to add a bit of color.  The pic on the left is an earring (unfinished, obviously) using #8 beads in several metallic tones as accents to the dark gray tubes.  Here I may actually end up using smaller seed beads, as the diameter of the tube is small.  I don't have many #11s right now, so I used my usual 8s, and I think that it works.  I'll try #11s next and compare the results.  Anyway, this has all been fun.  Thanks, Gwen
Posted by Emilie at 3:18 PM No comments:

Just a quick post.  As beadweaving has become as important a part of what I do as rugweaving, I've wanted to have a website that treated the 2 media equally.  So I've started emiliepritchard.com.  I'm still working on it, adding more pictures, captions and such, but it does basically what I want to do.  Check it out; I'd love your feedback, as it's still quite fluid.
Posted by Emilie at 2:51 PM No comments: