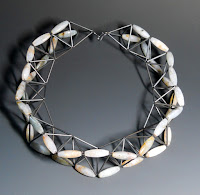 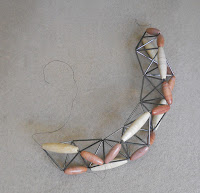 This is a post that, more than most, is just me talking to myself to remember something, because it's about a piece I started to make, but don't like too much and plan to take apart.  I've always liked the piece pictured first.  It was made with 25mm tubes and quartz beads of around 20mm.  I recently bought some malachite beads that are a sort of pinkish tan, and wanted to use them on the outside edges, but I wanted to use 28 mm silver tubes everywhere else. This was partly to make the piece a bit bigger, and partly because I 'm low on 25mm tubes just now. But I found that that combination of lengths made a curve that was way too shallow (obviously, the tightness of the curve is just a matter of how much longer the outside edge is than the inside edge).  The outside edges consist of 3 beads in a sort of a straight line and then and then a shift to a new angle. So I went back and put a long(35mm) marble bead in the middle of each set of 3, in place of one of the pink ones.  I liked the way it made the set of 3 curve, so you get an interesting outline, as you can see in the bottom picture.  But I didn't like the 2 colors.  Too jumpy.  If I'd used all 28s on the inside I was headed toward a piece that was about 21" on the inside and 26" on the outside.  No Pythagorus here, I just laid it on top of a salad plate and the outside curve was pretty close to the outside curve of the plate.  A saucer (21") fit the inside. That seems pretty big, so I needed to shorten the inside edge some more.  I tried substituting a 20mm on the inside, but you have to do it in pairs, and 2 20mm tubes would have made the curve too tight (there's one 20 in the sample).  It looked like the curve with all 28s would have led to a piece with 9 units (maybe 8 and a clasp).  If I'd used all 25s on the inside that might have worked.  Or, to get a more oval, less round shape, 28s with 4 25s, to sort of make 4 "corners".  You could do it with gold tubes on those outside edges, and it would be pretty interesting too.
Posted by Emilie at 7:01 AM No comments: 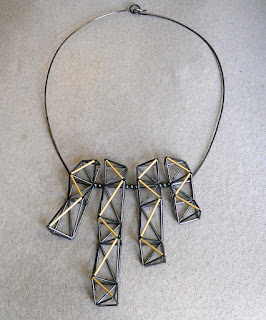 I liked playing around with shapes on a neckwire a few weeks ago, so I thought I'd try another.  I think the rectangles with gold zigzagging down them worked well.  makes for a pretty wearable piece, as well as an attractive one.
Posted by Emilie at 6:46 PM No comments: