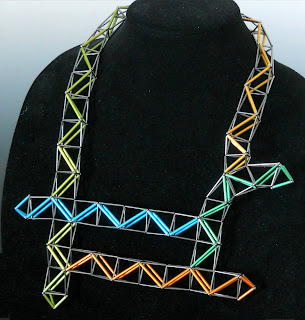 I mentioned in the last post that I redid my arrow-ish piece without the colored zigzags because the anodized aluminum colored tubes were 25mm long and without adding a seed bead at each end, these were too short to be diagonals in a right angled octahedron that used 20mm tubes for the sides.  Obvious because the hypotenuse for a 20x20 right triangle is roughly 28mm.  So I did a right angle weave version with no angled pieces, just squares.  I really liked the piece, but I still missed the color, and I had all these 25mm colored tubes, wanting to be used.  So after many failed attempts, I finally realized that if I just switched from a 20x20 square to a 17x20 rectangle, the colored tubes would be long enough. Duh.

So I made the piece out of octahedrons with triangles on the sides of 20/20/10 and cross sections of 17/17/10.  The ones at the junctions of a horizontal row and a vertical one had to be 17x17 squares, and so there I had to cut down the colored tubes, but that was no problem.  And I kept the extra curved arrow that I had put into the plain silver piece, which I liked a lot.  I lost the wide arrow heads, which were cool, but with a triangular cross section I couldn't do them the way I had been able to do with a rectangular cross section.  And the piece is much firmer. I got rid of the seed beads at each end of the colored tubes, which had made the diagonal wobbly, because in recent years I've come up with a much better way to deal with the larger diameter tubes.  I make the piece using just the tubes, no seed beads.  Then after it's made I go back and take a thread just through the colored tubes, zigzagging back and forth, and I add a bead between each tube.  The thread going on a much more direct path through the piece actually does quite a bit to tighten up the piece, instead of making it looser.

All sounds pretty straightforward, doesn't it.  But it wasn't.  Because when I had initially moved from an octagon structure on my first necklace to the RAW structure in my 2nd one, I had dropped one unit of width to make the piece a bit narrower.  I liked that so when I went back to an oct structure I kept it narrower, at 7 units of width instead of 8.  Big mistake.  I long ago realized that with an oct structure you want an even number of octs so that the center of the piece is not an oct but the face between 2 octs.  This will keep the zigzagging symmetrical.  Since I had the 2 arrows going on opposite directions I hadn't thought I had to stick to that rule.  So I had made the whole piece up to the point where the yellow arrow started to taper and curve around the neck.  And I found that on the left and right sides the zigzags were parallel to one another, instead of mirror images. Doesn't sound like a problem, but when you start to taper and curve each shape, it's just about impossible to get the left and right sides to taper and curve symmetrically unless they're mirror images.  So I ended up tearing out the whole yellow arrow and part of the dark green curved one so that I could add in an extra oct to get the zigzags moving in the right direction.  This is why I never answer when a customer asks how long it took to make a piece--because for every one that goes smoothly there's one like this.  Still, all's well that ends well.