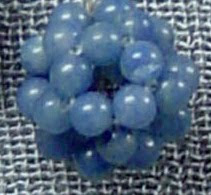 I'm so proud of this dodecahedron! If you're like me, and I know some of you are, you've made jillions of dodecahedra, so what's so special about this one? It was made using what the beaded molecule people call the Hamiltonian path, which means that each bead has only 2 passes of thread through it. (Actually don't look too closely at the picture, because I didn't take the time to photograph the actual one, but since I wanted a picture for the post I just used the photo from one of my dodecahedron earrings--but, trust me, I actually made the real thing.) I read about this Hamiltonian path on the blog a few days ago, and my first thought was "that's impossible". Since each bead is in 2 circles, I knew you'd need 2 passes, one for each circle. But you need a third pass to get your thread into position for the next circle. Today, while I was away from the computer, I was composing a comment to the blog, asking them to explain. I was going to say that I knew you'd have only 2 passes through each bead if each circle was a separate piece of thread. Also you could do the same using 1 thread for each 2 circles, by making figure 8s out of 2 circles and then joining them together. A few hours later, while I was doing something entirely unrelated, it occurred to me that if you could make a figure 8 (2 circles) you could extend that and make a 3 circle version. If that was so there must be a way to extend that to 12 circles in such a way as to have a dodecahedron. That led to much staring at diagrams of dodecahhedra, and eventually I figured it out. Actually it turns out that if you use the 2-needle technique--that is, a length of thread with a needle at each end--it's not hard to do. But it took me a while to realize that. I don't much like the 2-needle thing, because it makes it hard to maintain tension, but it simplifies things because you don't have to figure out a way to get the thread back to the beginning of the structure. Essentially you're bringing the beginning and end of the thread along with you. Anyway, I made it, and it was great mental exercise. Now I'll go back to making things the usual way. By the way, does anyone know who Hamilton was/is?
Posted by Emilie at 6:17 AM 2 comments: 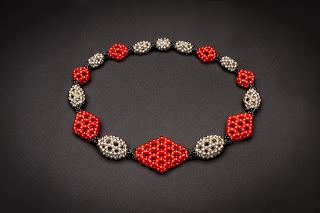 I haven't posted much lately, but I've been working at the beadwork, trying to expand the vocabulary of shapes I can create. This is one, using a graduated set of diamond shapes in gemstone beads and graduated egg or oval shapes with the nickel silver beads. Obviously it's totally symmetrical. After doing that one, I did another, mixing up the shapes and colors a bit more. This is that one. 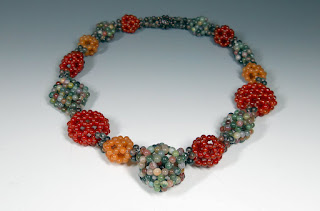 I really like working with the stone beads, and putting that sort of color in the work. In one way, it's a pain because the holes are so much smaller than seed bead holes. But I like the soft colors alot.
Posted by Emilie at 8:15 PM 3 comments: