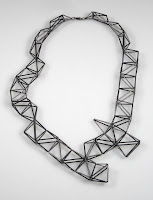 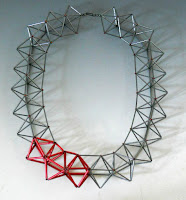 I've been thinking design thoughts lately.  Partly that's because one of the things I miss from my rugweaving days is working with color.  And partly because I've started adding some gold to my pieces and the price dictates that I get maximum impact for the colored (i.e. gold) tubes I use. 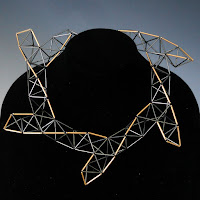 First conclusion I've reached--always subject to change--Where a piece has a really interesting shape, and particularly an interesting outline, like the first piece shown, it works quite well in just oxidized silver. I could add areas of color if I wanted, but I don't have to. This would apply to my charm pieces as well.  But where a piece is really regular some color helps to break things up, like in piece 2. And I tend to like having the color offset, not at the center of things.
The next issue--placing the color.  If I use a lot of colored tubes, I can do whatever I want and it will show well, but the problem arises when I don't want to use so many tubes.  My regular and mathematical mind wants to use them to highlight the geometry I've spent so much time creating.  But doing that usually means distributing a limited amount of color over the whole necklace, and sometimes it sort of loses it's impact. In the 3rd picture I have a piece where I think that spreading out the color really works.  You just wouldn't see how the arms of the pinwheel spiral without those gold tubes indicating it. But more often I think that massing it, as I did in the piece with red tubes, is a better bet.  I'd love to get others' opinions on this.  What do you think? 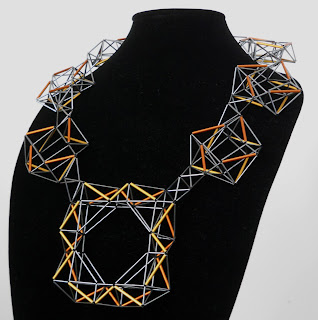 Since I've been blogging about this necklace as I've been working on it, I thought I ought to show the final piece.  I ended up using double tetrahedra between the individual links.  I said in my last post that I didn't think that would work because the tubes on corners of the links would need to be all parallel to one another, and they're not.
But then I realized that my brain, which tends toward regular, repeating stuff, was assuming I  had to join a corner of one link to a corner of the next one.  But the outside edges zigzag, so if the corner tube points northeast/southwest, the tube next to it (I'll call it the edge tube) would point sorthwest/southeast.  So I could join a corner to an edge and it would work out.  It diminishes the square look of the links, which wasn't my preference. But on the other hand, it moves the junction away from the center of the links, so that they extend more to the outside, rather than into your neck, which is good.
At the end I made one more change.  Although I liked the openness of the big bottom link, I decided it was just too wobbly, so I added diagonal tubes at each corner to firm up the right angles.  It's still quite open and much firmer than it was.  Anyway, that's the final product.  It's larger than what I normally wear myself, but I was looking for a more dramatic piece, and I think the size gives it that extra bit of drama.
Posted by Emilie at 5:09 PM No comments: 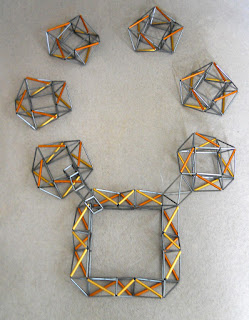 I finished the elements I wanted to make for my necklace--1 big and 6 small.  Now how to join them.  My plan was to just make ladder-like circles of beads to join the elements.  I made one and joined the big structure to the bottom left one that way. But I didn't like it so much.  After some playing around I realized that the corners of the big piece had an angled tube that was at right angles to  the tube at the corner of a small link.  So they could be opposite edges of a tetrahedron.  I did that at bottom right, and it makes a much cleaner connection.  It will also work between small elements, so I think that's what I'm going with.
Actually something just occurred to me as I write this.  The loops I originally planned, because they're less structured, would allow the links at the back to lie next to your neck.  I think the tets will force the whole necklace more or less into a plane, which means the back links will tend to stand up.  Double tets at each join would give more flexibility, but would (I think) only work if the tubes on the adjoining links were parallel, not at right angles.  Hmmm.
Posted by Emilie at 3:17 PM No comments: 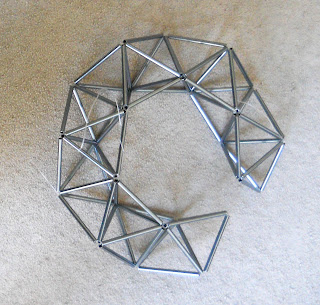 I'm still learning a lot playing with tets (tetrahedra) that include right angles.  The first picture here, which I used in an earlier post, shows the kind of ring structures I've been building for a while with equilateral triangle tets.  The inner ring is a row of triangles alternating point-up and point-down.  Then each of these triangles becomes the base of a tet.  Then, for the outer edge I join all the top points of the tets.
In the last couple of posts I switched from equilateral triangles to right angle ones.  The inner ring is a row of right angle isoceles triangles that alternate hypotenuse-up and hypotenuse-down.  Then I went on to see what structures I could generate.
But the problem with both of those structures is that all the tubes on that inner rim are at an angle 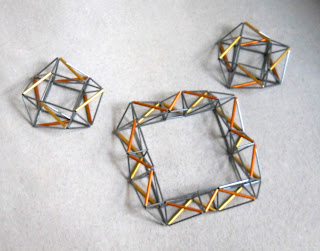 to the overall structure, so you can't easily break up the ring and put a clasp in, which you sometimes want to do.  So I started thinking about making the inner ring out of right triangles, but using the right angle so that you have tubes that are perpendicular to the overall direction of the ring.  I don't know if that makes sense, and I was in a hurry to write this down, so my picture may not show things well enough.  But I think this is going to be useful.  Here I won't be using a clasp; the plan is to make 6 (possibly 8) of the small shapes, with the big one at the bottom.  It'll be a  pretty large necklace--the big shape is over 4" across and the small ones are about 2 1/4" across.  So it should have a lot of impact.  You can't tell too well from my bad picture but there's a sort of pinwheel of orange tubes on one side and yellow tubes on the other.  I'll probably put 1 color on top for all the small shapes and the other color on top on the big one.  Stay tuned.
Posted by Emilie at 5:49 PM No comments: