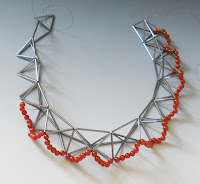 This is  a continuation of an idea I talked about over a year ago ( Jan, 2015 to be exact).  I've made several pieces that are chains of tetrahedrons.  What I've learned is that instead of making 1 tet, adding the next and then the next, I can plan it better if I first make a chain of all the bases of the tets (far left in the first picture), then turn each base triangle into a tet (middle) then join the tets at the tops.  The length of the tube that joins the tops will determine the curve of the structure.  Here I thought of not using a tube to join the tops, but rather a string of beads.  The length of the bead string determines the maximum curve, but within that limit the necklace can take the curve it wants.  And the curving bead string gives the piece a ruffly look that I sort of like.  The tighter the curve the piece takes, the less ruffly it will look.  I assumed it would want to take a tighter curve at the bottom of the necklace than along the sides, so I added 1 bead to each chain for the links at the bottom to preserve the ruffliness.
As a side note, I have to say that this blog has turned out to be a help to me in keeping track of what I do.  I've now had several occasions where I've had to reproduce something I've done before, or a variaton on it.  I've never been too good at keeping records of what I do, but looking back at what I've blogger about has been a help.  When I come up with a new idea, it seems interesting enough that I won't forget it, but 6 months down the road,  I'm trying to remember what the actual lengths and arrangements of things were, and it's gone.  Ah...age.