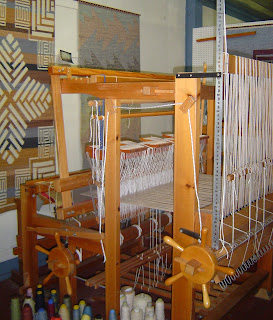 Just because this is a crafty sort of group, I thought I'd mention that I'm selling the Glimakra loom that I've used for rug weaving for  many years.  For the weavers I'll say that it has shaft switching and a warp extender per Peter Collingwood's specifications.  I have lots of pictures and plenty of information for anyone interested,  and would be happy to spend time getting you comfortable on the loom.  Just contact me.
Posted by Emilie at 1:45 PM No comments:

What a difference 8 beads (tubes) makes 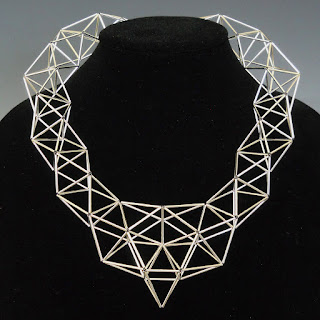 Yesterday was a good day.  I feel like I improved a necklace.  The top pic is a piece I made a few months ago. I wanted it to be sort of special, because I don't do too many pieces in bright silver  (don't want to spend time worrying about tarnishing). I had high hopes for it, but when I was finished, I wasn't quite happy with it.  I wasn't sure why.  But yesterday I was scrolling through my pictures, and stopped at that one.  It occurred to me that what I didn't quite like was the extreme pointiness of it, sort of like an icicle about to fall on you.  I also noticed that there were a pair of triangles on either side of the bottom point that could be turned into 2 faces of either an octahedron or a double tetrhedron.  I chose the double tet, cut some beads and added them on and I like the "new" 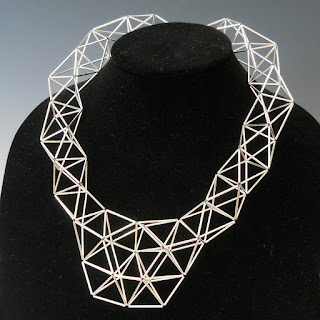 necklace, the one on the bottom, better.
That is both one of the upsides and one of the downsides of beadweaving versus the rug weaving that I used to do.  When  rug came off the loom it was done.  Nothing more to think about, because you couldn't change anything.  Now I find myself tinkering with pieces.  Mostly I like that, although sometimes it's nice to just say it is what it is.
Posted by Emilie at 11:14 AM No comments: