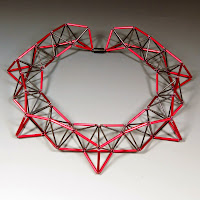 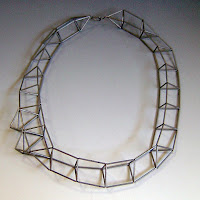 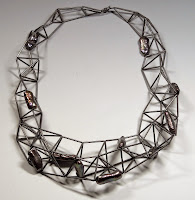 I just finished a piece (the 3rd one in this group) and it got me thinking about some of the things I like in a design.  I actually like all 3 of these pieces, but in some ways the last one works best for me.  It is neither entirely symmetrical, like the first piece, nor as random as the 2nd one.  It's sort of a Goldilocks thing, where you can easily see the symmetry, as well as the decision to break it.  A bit like the motto of Oregon College of Art and Craft--Know the rules to break the rules.  I've always been drawn to that idea.  Anyway, I'm busy making pieces like #3 now.

OK, my long-dormant etsy site is live again, with just a few pieces on it.  I plan to add a few every day till I get a reasonable selection.  When I started this blog, I swore I wouldn't make it a "here's my newest piece on etsy" sort of thing, but would talk about my ideas on a more creative level.  So hopefully I won't mention it again, but the link is there if you're interested.  While I'm doing a "commercial" post, I'll also mention that everything I make is for sale, even though only a small fraction of it will make it to etsy.  So if you see anything that interests you, just contact me and we'll work something out.
Posted by Emilie at 12:46 PM No comments:

Email ThisBlogThis!Share to TwitterShare to FacebookShare to Pinterest
Labels: etsy

Just a quickie post.  I have an etsy shop that's been inactive for a while, but over the weekend I'm going to try to reactivate it.  It's eporiginals.etsy.com and I'll try to put some of my new work on it if anyone is interested.
Posted by Emilie at 7:49 PM No comments:

Email ThisBlogThis!Share to TwitterShare to FacebookShare to Pinterest
Labels: etsy 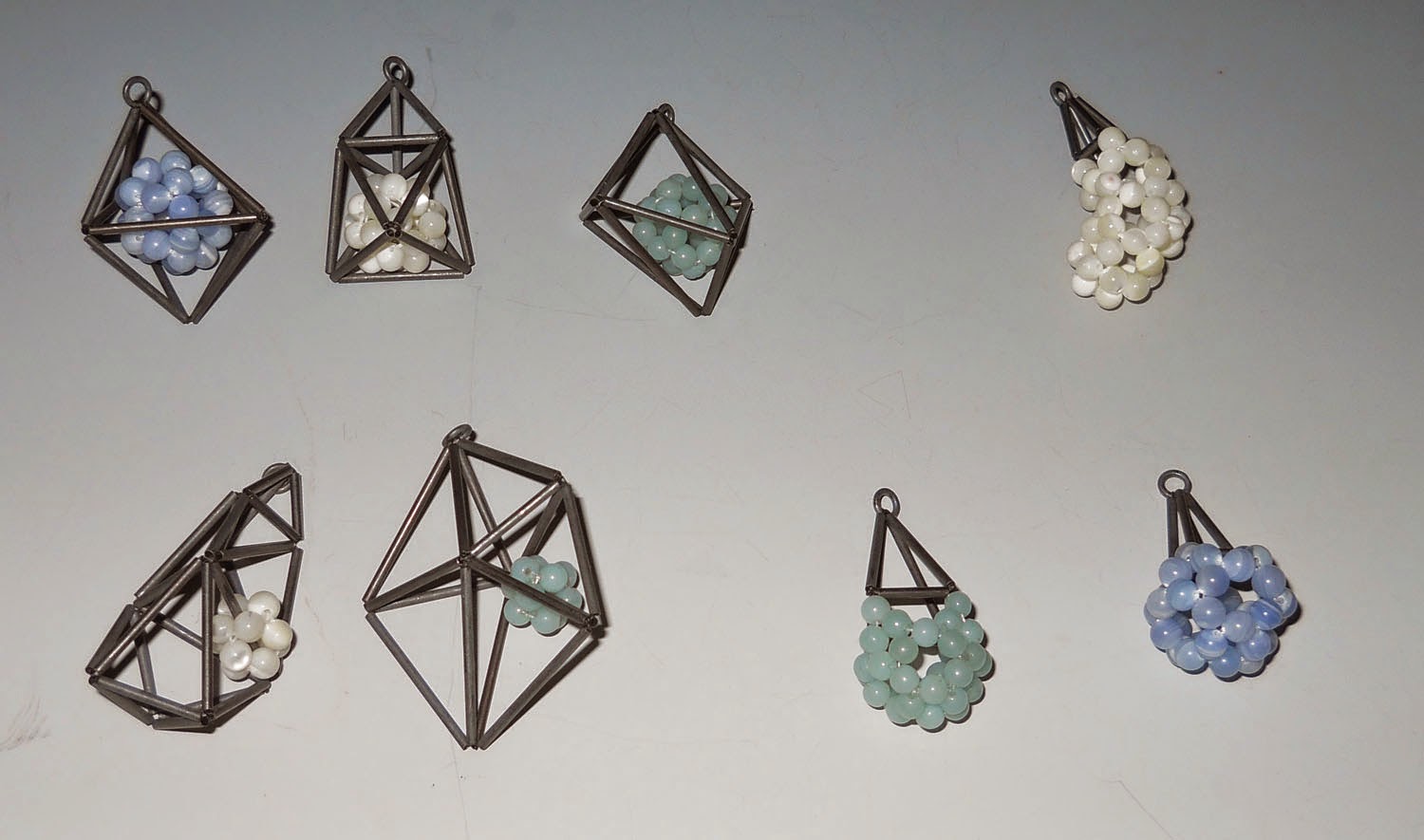 I have a new project going.  I'm going to be showing my jewelry at the Baltimore ACC show next February.  They are doing a promotion around charms.  If you want to participate you have to commit to make, at a minimum. certain specified pieces.  For example, a charm bracelet, a necklace with a cluster of charms grouped at the bottom,  some loose charms, etc.  Then they do a certain amount of promotion, not relevant here, around charms.  It seemed ideal for my work, although, I've never made charms as such.
Anyway, ever since I signed up, I've been playing with making charms, as they need images of the work next month.  Some of them will be geometric structures made of tubes,  but I wanted to play with ways to mix gemstone beads with the tube structures.  These are what I've come up with so far.
One thing that is inspiring me is I picture I look at from time to time in an old American Craft magazine from 2011.  It was about the glass school at Pilchuck, in Washington, and it had pictures of work of lots of glass artists who have been associated with Pilchuck over the years.  The one that interested me was a picture of vessels by Dante Marioni.  In it he had set himself some tight parameters. The vessels were all roughly the same size and were all made of clear glass with black glass trim.  But within those limits he had made over 150 vessels, each different from all the others and all interesting.  It sort of made me think of a Chopin etude, which is a piece you use to practice a technique, but that doesn't stop it from being beautiful.
Anyway, I have lots more charms to make, but this is where I'm headed.
Posted by Emilie at 3:44 PM No comments: