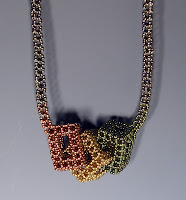 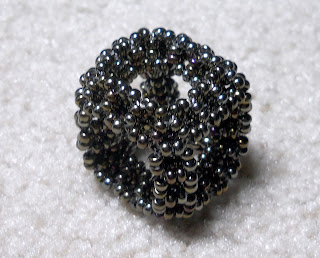 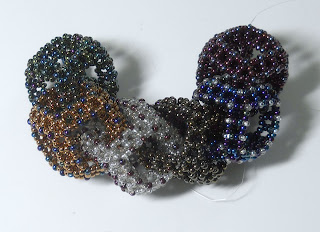 A few posts back, I talked about some necklaces I'd done with interlocked cubes.  I like them alot, but they're pretty slow to do.  One of the things I liked was the transition from the RAW cube modules that make up the big cubes at the bottom (I'm saying "big cube" to distinguish the overall element from the modules that make it up) to the triangular prism modules that make up the "chain" part of the necklace.  By triangular prism I mean that that the sides of each module in that part of the necklace are 8-bead cubes, but there are only 3 sides, so the cross section is a 6-bead equilateral triangle.  It makes that part of the necklace a bit smaller, and quicker to make.  I started wondering if there was a way to make the big cubes using  triangular prisms for the modules.  Turns out you can.  The corner of each big cube is a tetrahedron.  Of course the modules coming off the tetrahedrons don't "want" to make a right angle corner.  They're really at 120 degrees.  But in the same way that you can make a rounded tetrahedron using RAW cube modules, you can make a rounded cube using tatrahedrons at the corners.
I usually find that an advantage of forcing  beads to do something they don't "want" to do in that way is that it stiffens the piece up.  That didn't really happen here.  I suppose that just the fact that each big cube made this was has a lot fewer beads in it than it would have if made with cube modules, thay came out floppier than I expected (or wanted).  I ended up having to go back and add beads in contrasting colors between the modules on each face to stiffen it up.  I like that, but it at least partly removed the speed advantage I was hoping for.  I'd like to make a whole necklace of interlocked cubes, and, once again, it'll be pretty slow going.
One more thing.  I don't know if you can see it very well from the picture but when I added the green cube on the left to the gold cube next to it, I goofed, and didn't link it onto the opposite corner on the gold bead, but instead to the opposite corner of the same face of the cube.  Should have been the opposite corner of the opposite face.  However, in the grand artist tradition of deciding that a mistake is really a "design element", I did it again on the other side.  Works for me.