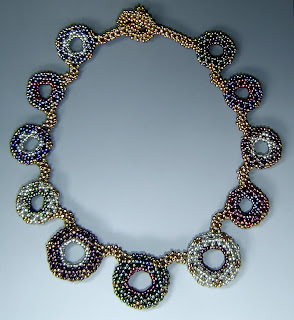 I've sort of surprised myself by going back to doing alot of seed bead work. 6 months or so ago, I was doing lots of pieces using long beads--copper, glass, and stone ones. I liked that alot, and I'm still doing it. I particularly like it because the long beads show the geometry of the structures better than seed beads do. But I've gotten bothered by how much you're at the mercy of just what beads you can find. For example, I did several pieces using a mix of copper oval and tube beads. I was working on another when I got my next shipment from Fire Mountain Gems. This time the oval beads, which are listed as 4x9 mm, were noticeably smaller, and with a much smaller hole, making it hard to make the many passes through the hole that are sometimes needed. The earlier beads were actually longer than 9mm, and these were less than 9mm. Probably the earlier ones would round down to 9 mm and the new ones would round up to that, but they were clearly different. This isn't a criticism of Fire Mountain Gems, it's just that it messed me up. Other people sell 4x9 copper ovals, but there's no way of knowing if they're more like the earlier ones or the later ones. I had to take apart an unfinished necklace, so that I could mix up the larger and smaller beads so as to make the difference unnoticeable (actually, I still haven't finished the piece). Anyway, it irked me to be so dependant on the materials. As another example, I've done quite a bit with some glass tube beads around 14 mm long. I've gotten them from shipwreck. Now they're on sale, and I wonder if my source is about to dry up. You can always find seed beads, and RAW and similar weaves are endlessly variable. Anyway, some seed bead ideas have been percolating while I was working with the larger beads, so now I'm back to the little ones.
Posted by Emilie at 6:25 PM 3 comments: 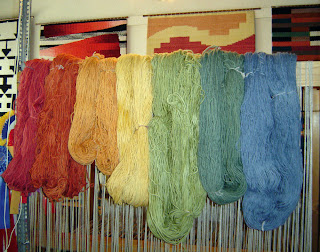 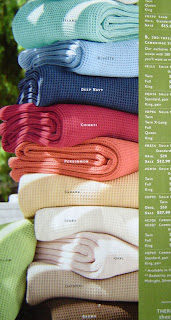 I haven't talked much so far about my rugweaving. My rugs are all about color. More so than the beadwork, because with my wool yarn I can dye my own colors. Last week I did one of my larger dye runs. It started with a page that I clipped out of the Company Store catalog quite a while ago. It showed cotton blankets in a range of colors. I liked that the colors were lively, but still a bit muted. The orange is sort of a spice color, the red is softened, etc. I've done alot of rugs with color progressions, but usually over a smaller range, e.g.yellow to blue or red to yellow. This time I went all the way from red to yellow to blue. I added a few colors to the ones in the catalog picture and changed the value of the colors to get darker hues on the ends and yellow in the middle. Also in the blanket colors there was a big gap between orange and yellow. I added a yellow-orange (the 3rd skein in the picture), but that's still the biggest gap in the series, I think. I dyed 2 lb of each, which will give me enough for around 3 rugs, since I'll partner the colors with a neutral. The 1st rug is on the loom now, and I'm using black with the colors.
in order to do the run I created 3 dyestocks, A blue muted with black, a yellow muted with brown and a red muted with some of the yellow and blue stocks. Then I could create the gradual progressing by putting successively more of one stock and less of the next one so that I worked my way around the color wheel. I still have some red and some blue left, so if I want I could complete the "circle" by dying wome purple yarn, but for the moment I'm leaving it as is.
Posted by Emilie at 2:32 PM 1 comment: 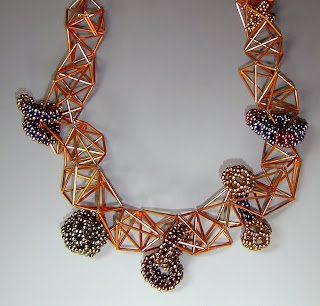 I've been trying to do get away from strict symmetry in my beadwork. The links pieces were 1 step toward that goal; this is another. In general my beadwork using copper beads has been my most rigidly symmetrical. I've been trying to create a look reminiscent of bridge trusses or other engineered structures like that. Here I took a big step away from that. The indiividual structures are, in fact, octahedrons, but I made them using a combination of long and short tubes. Each individual unit still has a sort of symmetry, but by joining them together in different ways as I go along, I've created a random look that I like. Then since the structure is so open I've attached other geometric structures to it. They create interest. Also, I find these copper tube bead necklaces are pretty light and need a bit of weight added in order to hang well. The glass bead structures give it that.
Posted by Emilie at 1:45 PM No comments: