I haven't posted in an age, but I felt like doing a post that shows how my ideas sometimes grow and develop.  A while ago, I decided to step back from making a new piece, and just focus on finding 2 types of workable units for my work.  What I wanted to find was octahedrons that would have adjacent faces at right angles to one another, i.e.where the overall shape of the oct would be a rectangle.  That way I could have a chain of octs that would be a straight line.  The 2nd shape I wanted was octs that would make symmetrical 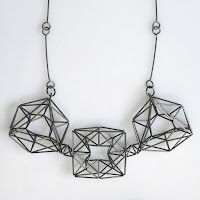 trapezoids.  That way you could make an oval shaped necklace by using the rectangular octs for the long straight sides and trapezoidal ones for the curves at front and back.  I came up with several of each that I could make with the lengths of tubes that I cut, and I am amazed at how many times I've gone back and used the units I came up with.  But also in the course of doing this, I happened on an oct I could make where 3 of the sides  formed the angles I've pictured--a right angle with an adjacent 45 degree angle.  This meant that eight of them joined at the 45 degree angle would make a square, one with a sort of star shaped center.  You can see it at the center of the 1st necklace shown.  Also one of my symmetrical trapezoids had an angle of (roughly) 60 degrees between the 2 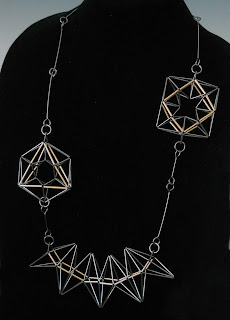 angled sides, so 6 of them made a circle (actually more of a torus, as the center is open).  I really liked having these 2 regular shapes.  But I thought I could accent the geometry by using some gold tubes in the middle layer of each shape.   That way there's a silver square and circle (hexagon actually, but it reads as a circle) and a gold triangle and diamond.That's necklace 2 and I thought it was an improvement.
I wanted to make a pendant of the square shape, but I wanted it to be bigger than what I had.  The square I had so far was a bit over 2" on a side.  But I found that if I turned it 45 degrees so it was a diamond and then added 2 right angle tetrahedrons on each edge I'd get a square that was almost 3" on a side, which was more like what I wanted. I also changed the arrangement of gold tubes, putting them on the inside star shape and on what used to be the outside edge, but was now an intermediate diamond.
Finally, I wanted to make a whole necklace using the square as the focal point, but I wanted to go still bigger.  As I've worked out the tube lengths that I want as stock units, I've 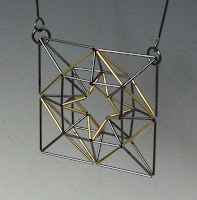 found that lengths that approximate multiples of the square root of 2 are useful.  So since my smallest length is 10mm, I'd ideally want one of 14.15xxx...mm, then 20mm then 28.3xxx...mm then 40 mm.
Obviously my tube cutting jig and ruler will only approximate that so I use 10, 14, 20, 28 and 40mm.  In between those I have another series that's 12, 17, 24 and 34mm. Again in an ideal world the 2 series would fit together so that the relationship between each length and its neighbor would be the same, i.e. 12/10 would be the same as 14/12, 17/14 etc.  If that were the case you could come up with a shape, and then you could scale it up or down and it would work at any place on the series, just the way that in music a melody stays the same as you move it up or down an octave ( or a fifth or whatever). 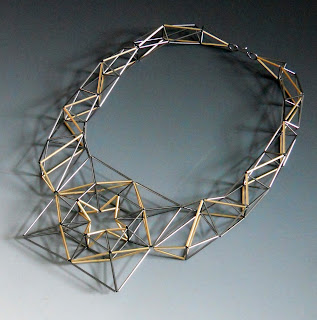 As I've said, my ratios are close, but not exact, particularly between the 2 series.  So it took a fair amount of trial and error, but I finally found that if I scaled everything up 1size on my tubes except for one on the outside that I left the same, I could make a square that was the size I wanted, almost 3.5" across. Then there was a fair amount of trial and error to get a good curve that got gradually smaller so as to not be too bulky in the back, but I'm really happy with the result, and with all the steps along the way as well.