explorations during the lockdown 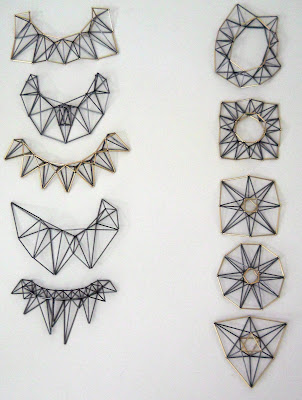 Like everyone else (except healthcare workers and the like) I've got time on my hands just now, as I'm home all day except for a walk.  And because my shows were cancelled and my galleries are all closed, I don't need to be just producing "inventory".  Mostly my pieces are one-offs, but by now in several categories (pendants, bracelets and, especially, earrings) there are some styles that I repeat, sometimes with variations, because they sell well.  But I have enough of those now.
Since I didn't want to do repeats, I decided to do a series based on a single idea and see where it took me. I often do 3 or 4 pieces based on an idea before I get hijacked by another idea/structure, but this time I decided to stick with one for a while.  It's a tetrahedron structure that I've used a lot and written about before. The earlier posts were in January, 2015 and March, 2016.  But I decided to really beat the idea to death.  One inspiration, for those of you who, like me, keep old copies of American Craft magazine, is a picture in the Feb/Mar 2011 issue.  It shows a series of well over 100 glass vases by Dante Marioni.  All are similar in overall size and made of clear glass with black accents.  Within those tight limits he goes crazy.  To me it's like a theme and variations in music.  Even better, it's like a Chopin etude, where you take something that is basically an exercise and make it beautiful.  Anyway, I really love it.  I'll never do a series that big, but this is what I've done so far.  Most have gold accents that don't show up well in this picture. The first 5 will be focals hanging from chains.  #5 (top on right) has 1 fat tube at the back that I'll insert a handmade safety pin-type structure to make a brooch.  #6 will be a pendant focal, or I'll add a fat tube (although it would cross the circular open space in the center, and I'm not sure I want to do that). The last 3 could be used separately or together, not sure which. I really like them together, but it makes a pretty big group.  Time will tell.
Posted by Emilie at 12:06 PM No comments: