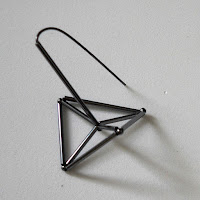 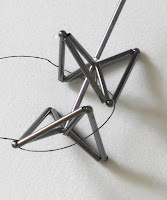 I've been having fun playing with a new area of mathematics.  Up to now my explorations have had to do with building polyhedra.  But I do look occasionally at Kate McKinnon's peyote stitch based work done in seed beads. Under the heading Contemporary Geometric Beadwork, she's produced several books, as well as lectures and lots of other stuff.  I admit I don't have the books.  Since I don't do peyote stitch and I no longer do seed bead based work, I thought lots of it wouldn't apply to my work.  But I do look at the pictures of what she and her group do, and find it quite interesting (as an aside--since the people who read this blog are mostly beaders with a mathematical bent, if anyone knows which of the books in the Contemporary Geometric Beadwork series would have a good coverage of the theories for someone who doesn't actually do peyote stitch with seed beads, I'd love a recommendation). I've often thought I should play around with the hyperbolic plane that she uses. She calls it a warped square, and it's made of 4 triangles.  If they were right triangles it would be a flat square but since the "hypotenuse" is longer than it would be in a right triangle there's more perimeter and the structure isn't flat.  It has always seemed to me that my way of making triangles has much more flexibility than the peyote stitch way.  It seems to me the shape of her triangles is determined by the shape of the seed beads--the relationship between the height and the diameter of the bead used sets the shape of the triangle.  In that way I have much more flexibility. I can  cut any length tubes and get whatever triangle I want.  Of course it's also much faster, but on the other hand I can't do the great stuff with colors and patterns that she can.
Above is a single warped square made into an earring, and another earring with 2 of them.  I said my way of working  gives me more flexibility, but on the other hand my "stock" lengths are sort of set to be able to build right triangles. For example, I cut lengths of 10, 14, 20, 28 and 40 mm. Each one is more or less the one before it times the sq root of 2. So 10/10/14 makes a  right triangle ( or would except that the sq root of 2 isn't 1.4 but 1.4xxxx to infinity), as does 14/14/20 or 20/20/28 etc.  I also do 17, 24 and 34mm lengths, which fill in the gap and work the same way.  But to jump to 14/14/24 makes a very warped square,
(similar to what's in the earrings, which use triangles of 10/10/17) and more than I wanted.  So I decided to try making squares where just one of the outer edges was 24 and the rest were 20s.Here's a double row of these squares. 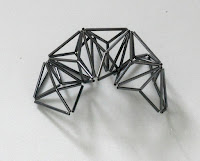 I liked it, and thought it could make a good bracelet ( you can see on the left end an additional structure I added where I could put a clasp). But there was 1 problem.  There are 2 versions of the square.  If you arrange the "plane" so that the tube on the bottom is horizontal, the tube on top can either go from high on the left and low on the right or vice versa.  Since the triangles are theoretically rigid you can't change it once it's made. In this way it's different from the peyote triangles which are inherently flexible. In the top pic I arranged the squares so that each is the mirror image of the ones beside it, which is the way it would have to be for a bracelet.  But since the hyperbolic-ness ( hyperbolicity? no idea what the proper word is) is fairly minimal, if you push on one of the high points in the center of the structure you can flip it, and then it turns into pic 2.  You can just as easily flip it back, but a potential customer wouldn't know that and I didn't want to get bogged down in long explanations. So I changed it, making essentially warped rectangles, where the outside edges were 2 20s and 2 24s.  That made the bumpiness more extreme and hence more stable.

I also tried a structure where the warped squares didn't go back and forth between the 2 versions, but were all the same version.  That made the warping spiral.  That's the last picture, but you can't see what's happening very well. In order to make it work, I'd need to replace 1 tube in each square with a gold or colored one so that you could see it spiral around.
There's another way to make a hyperbolic plane. Instead of adding length to the tubes that make the perimeter of the structure you can add an extra triangle, i.e, where 4 right triangles would make a flat square, 5 of them would make a hyperbolic pentagon.  That's the sort of structure that will get progressively more wavy in the way of a lettuce leaf.  But doing it with 5 right triangles was too extreme.  Each pentagon was very non-flat. And if the first row had n structures the next would have 2n, and then 4n etc.  Again too  extreme and fast a progression.  I did it several years ago (you can see it in a post on hyperbolic planes from that time) using equilateral triangles, and where 6 would make a flat hexagon, 7 makes a hyperbolic heptagon. And each row will have 4 units for every 3 units in the one before, so the progression is still fast, but not so very fast. I really liked the one I did in colored glass beads back then, but had some trouble with the glass cutting the thread. I'd like to try one in silver tubes, possibly bright silver, but haven't gotten it done yet.