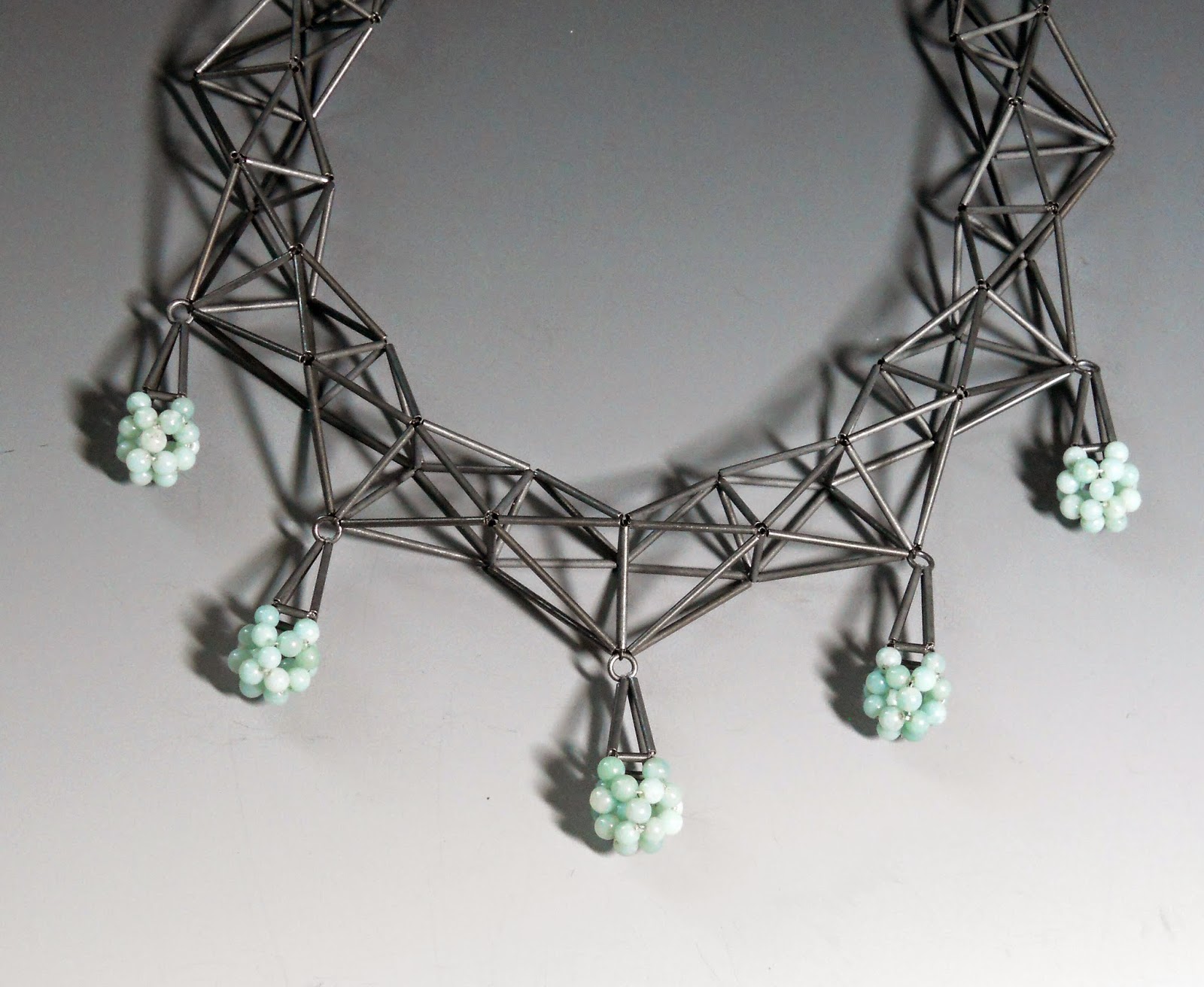 I think I mentioned in an earlier post that I'm playing around with charms for  the Baltimore ACC show coming up in February.  I'm finding I like them a lot.  My work, being so structural, tends to be relatively inflexible.  Mostly I like that, but it's interesting how adding things that dangle freely softens it up.  This necklace is a good example.  I made a very architectural scaffold-ish piece.  Particularly in the darkened sterling it has the feel of a bridge truss or cell phone tower or something of the sort.  But when you add the tear-drop shaped dangles it changes it completely, especially with the amazonite beads adding color..  It reminds me a bit of the great pieces that the artist Emiko Oke makes, using lego blocks to build Tiffany-esque  necklaces.
I have just one technical problem with it, and with charms in general.  I find that you can't use open jump rings at the top of a beaded charm.  Eventually it will move in such a way that the thread get up against the opening in the ring, and it will pass through the opening, because it's just thread.  You have to use closed rings.  Ditto for a ring attached to a necklace structure.  In the pieces I've made so far for the charm program I've attached the charms to oxidized silver links that I've made. They have open circles at each end, so I can slip the closed rings at the top of the charms into the open circles and close them up.  But I wanted to attach them to one of my truss structures.  Ideally you'd have a closed ring attached to the necklace and it would interlock with a closed ring on the charm.  But obviously 2 closed rings can't interlock unless you use an open jump ring between them, and I think that's too long a chain of rings.  If I could solder, I could link 2 rings together and then solder them closed, but I don't have the equipment or the skill to do that.  In this piece I used a single closed ring that's sewn at the top to the necklace and at the bottom to the charm, but it doesn't dangle quite as freely as I'd like.  I think what I'm going to do is reattach the charms to the rings, but I'll add a single bead ( here a 3mm oxidized silver ball) at the top of the charm so the thread coming from the charm will pass through that first, and then to the ring.  I think that will let it dangle better. 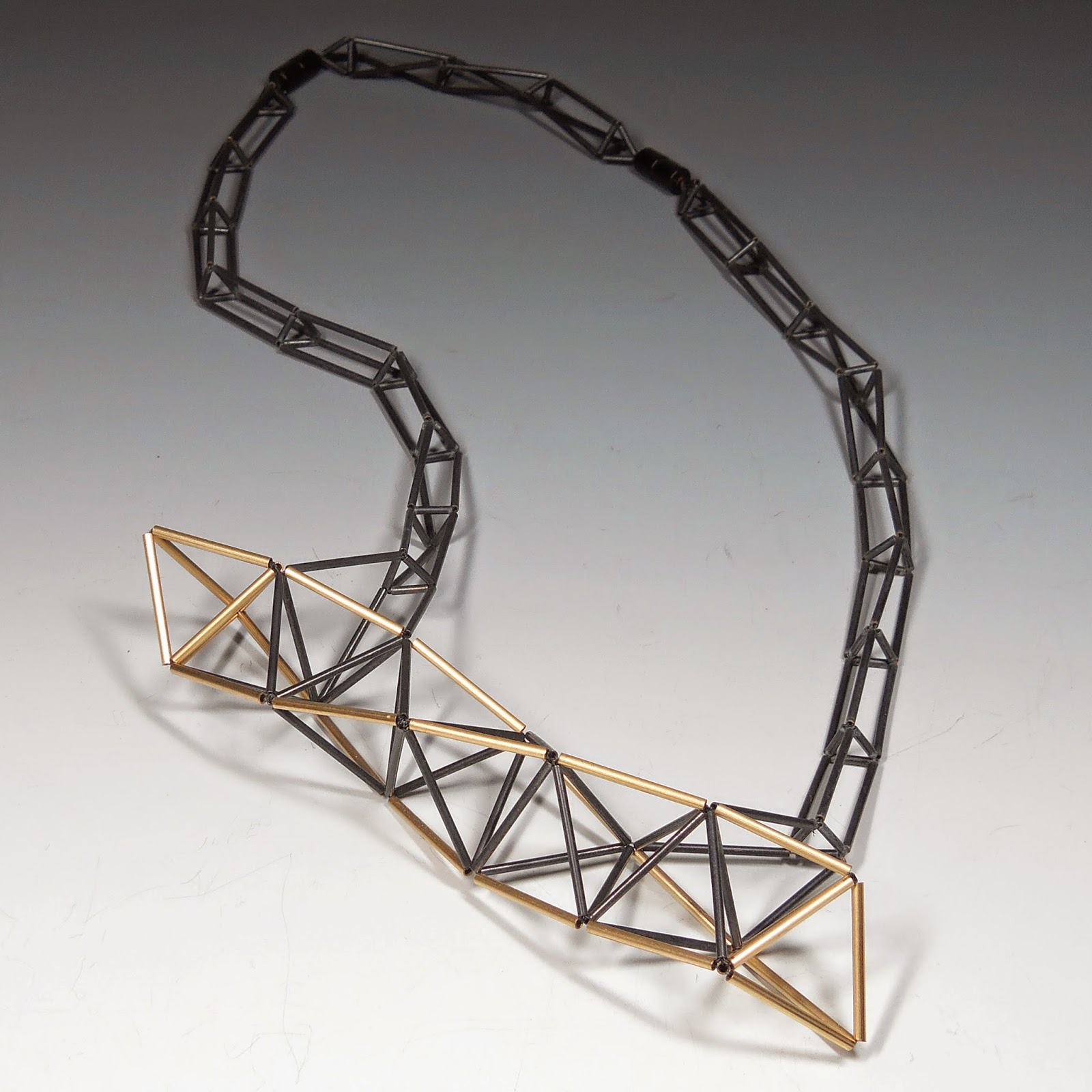 I think in my last post I talked about liking a sort of controlled asymmetry best.  I had no more said that when I started doing several pieces that turned out symmetrical.  Oh well.  I'm often not sure where I'll end up when I start a piece, and I like that.
The top picture here (which I think I blogged about earlier) is a tetrahelix using gold-filled tubes spiraling around oxidized copper ones.  I had some problems with the beads, and decided to redo it using oxidized sterling silver instead.  But when my spiral got to be 9 tetrahedrons long, I wondered what it would look like if I just mirror imaged it for 9 more tetrahedrons.  Actually, I like both versions.  In making my sort of pendant-ish necklaces, I've switched from a narrow right angle weave to a hand-made chain using 18 gauge sterling wire.  Learning to make the links (which is actually pretty 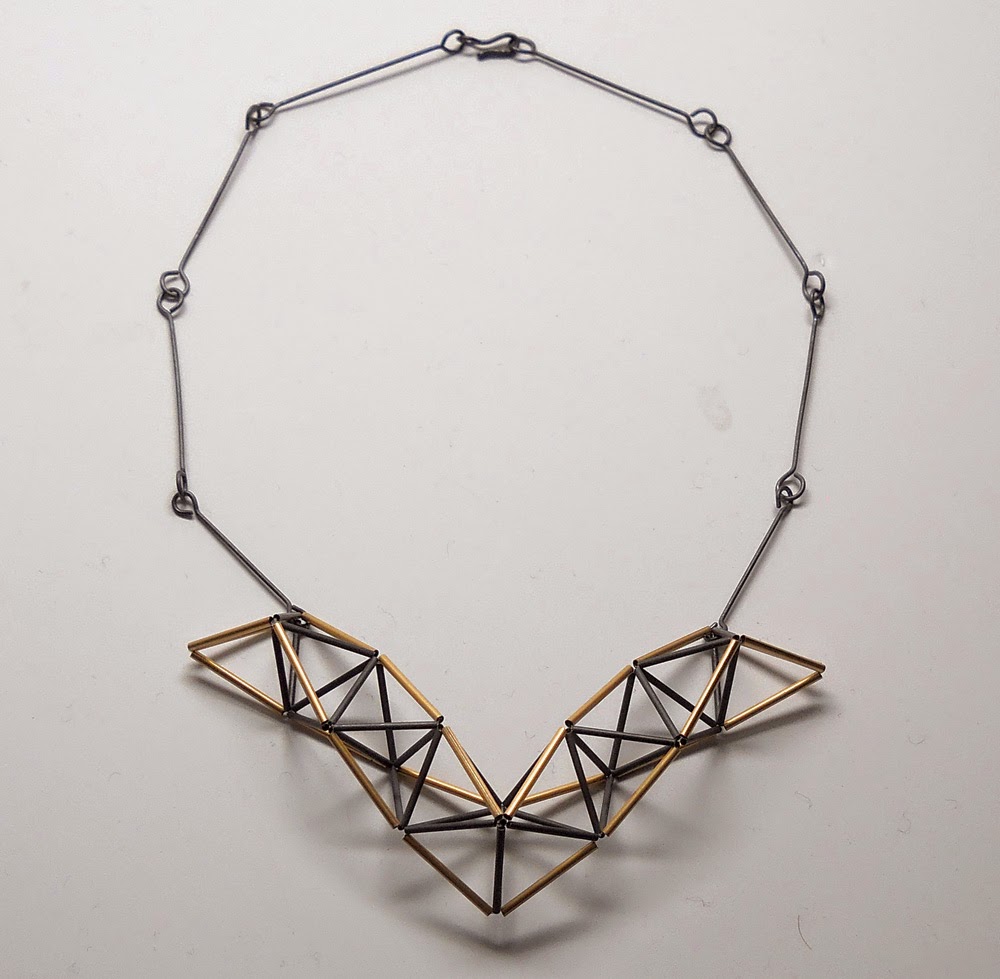 easy) has given me more confidence in doing simple wire working.  One of these days, I really need to learn some more about metalsmithing.
Posted by Emilie at 4:28 PM No comments: