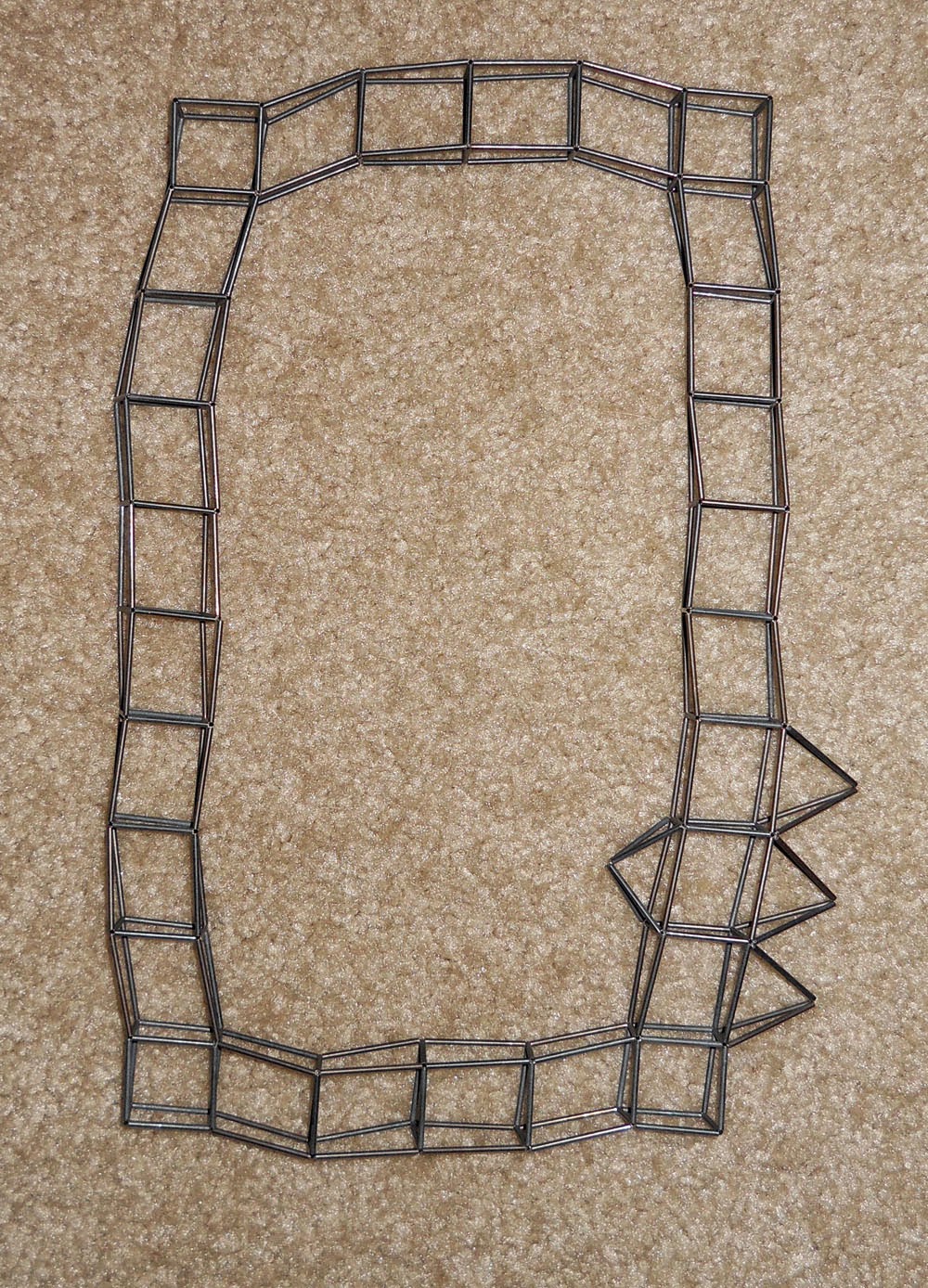 I wanted to do something simple and rather stark with my oxidized silver tubes.  Cubic RAW was an obvious choice.  I'd never used it with the tubes, and I didn't really think it would work, but I tried it.
Over time I've developed a sort of rule of thumb.  With round beads I don't much like structures that use triangles (i e circles of 3 beads) because too much thread shows.  Particularly I don't like to use monofilament  nylon fishing line and have 3-bead circles, because it won't pull tight over such a hard bend, and so lots of it sticks out.  I do occasionally do cuboctahedrons, which are a mix of 3-bead and 4-bead circles, but I tend to avoid them  when I can.  Similarly, with long narrow beads, and particularly with my metal tubes, I mostly only use triangles, because that's the only shape that will stay rigid with long beads.  So I have lots of tetrahedrons and octahedrons, because they're made of triangles.If you tried to make a circle out of 5 tubes, it wouldn't stay round, but could take most any shape.  When I have used 4-bead circles, I've always kept the cross section a triangle, because then, even if the squares turned into parallelograms, it still couldn't completely lose its shape, and it would remain 3 dimensional.
However, I've come to realize that while a single cube made out of tubes is pretty apt to not stay much like a cube, a series of them will have more stability.  Also, when I was using oxidized copper tubes I used fireline thread, because there wasn't enough room for monofilament, which is fatter.  But the silver tubes, although they're the same size on the outside, seem to have a thinner wall, so there's room inside for more thread.  So here I used monofilament line to support the corners of the cubes better.  The piece moves alot, but it still holds its shape quite well.  It's big, because I wanted it to just go over the head without a clasp, so the pieces that form the long side of each rectangle are around an inch.  Anyway, I enjoyed doing it, and may do more along that line.  One thing I'd like to do just for comparison, is a simple rectangular necklace like this, but made out of a string of octahedrons instead of cubes.  Then I can see whether a much more rigid piece works as well on the body as one, like this, with more give.

Posted by Emilie at 6:47 PM No comments: 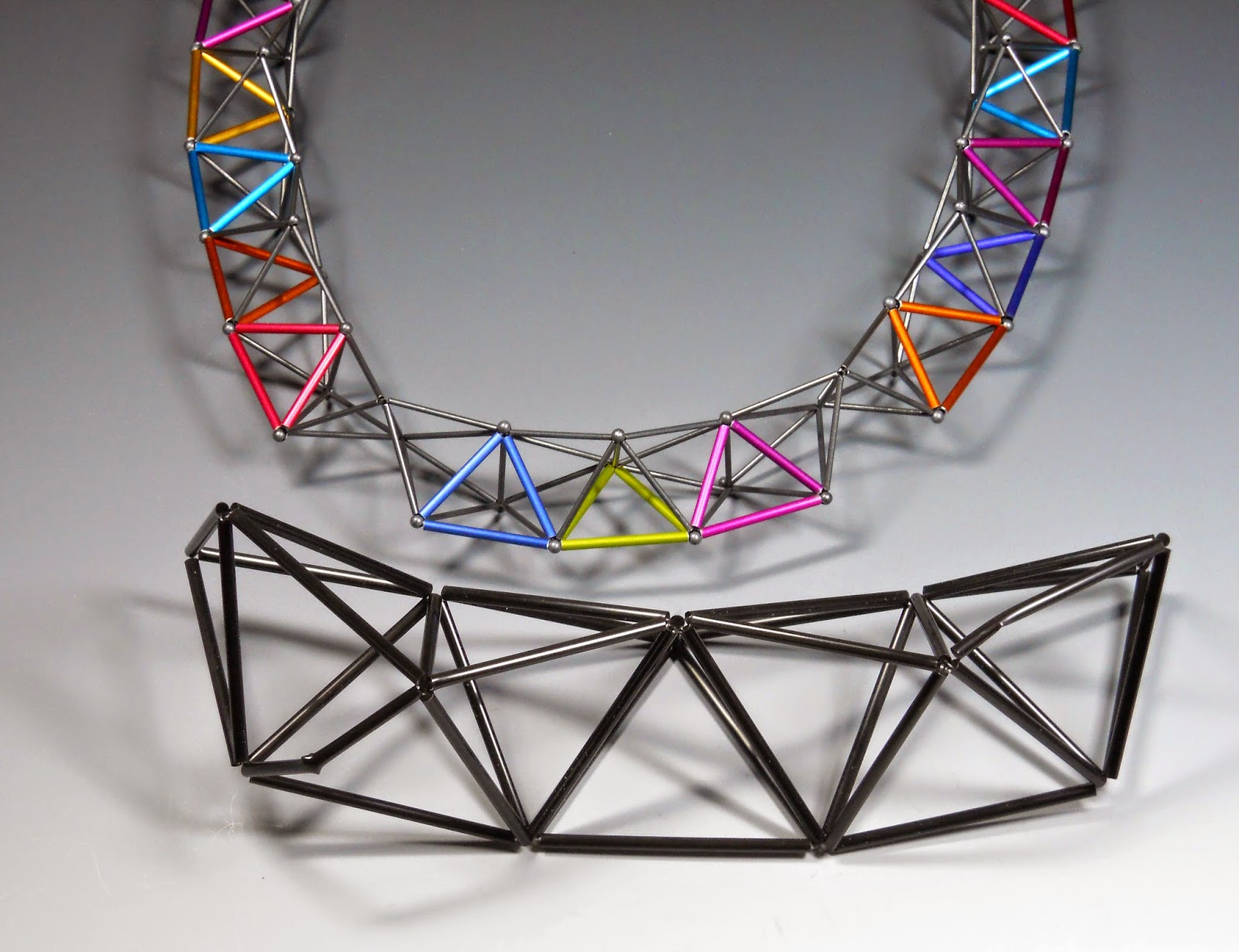 I'm playing with tetrahedrons again.  I'm discovering that being able to cut my own tubes is changing my mindset.  When you work with beads mostly you're saying "what can I do with the beads I have?"  When you can make your own you start to ask "What beads ( or in this case lengths of beads) will do what I want to do?"  I came up with a sequence of tetrahedrons that would produce a very gentle curve.  But by lengthening the tube on the outside of the curve you can make the curve sharper.  But how much to lengthen it?  I did what I could with math--Pythagorean theorem and all that.  But that doesn't completely do it because there's always some looseness in beadwork, and errors build up.  I had 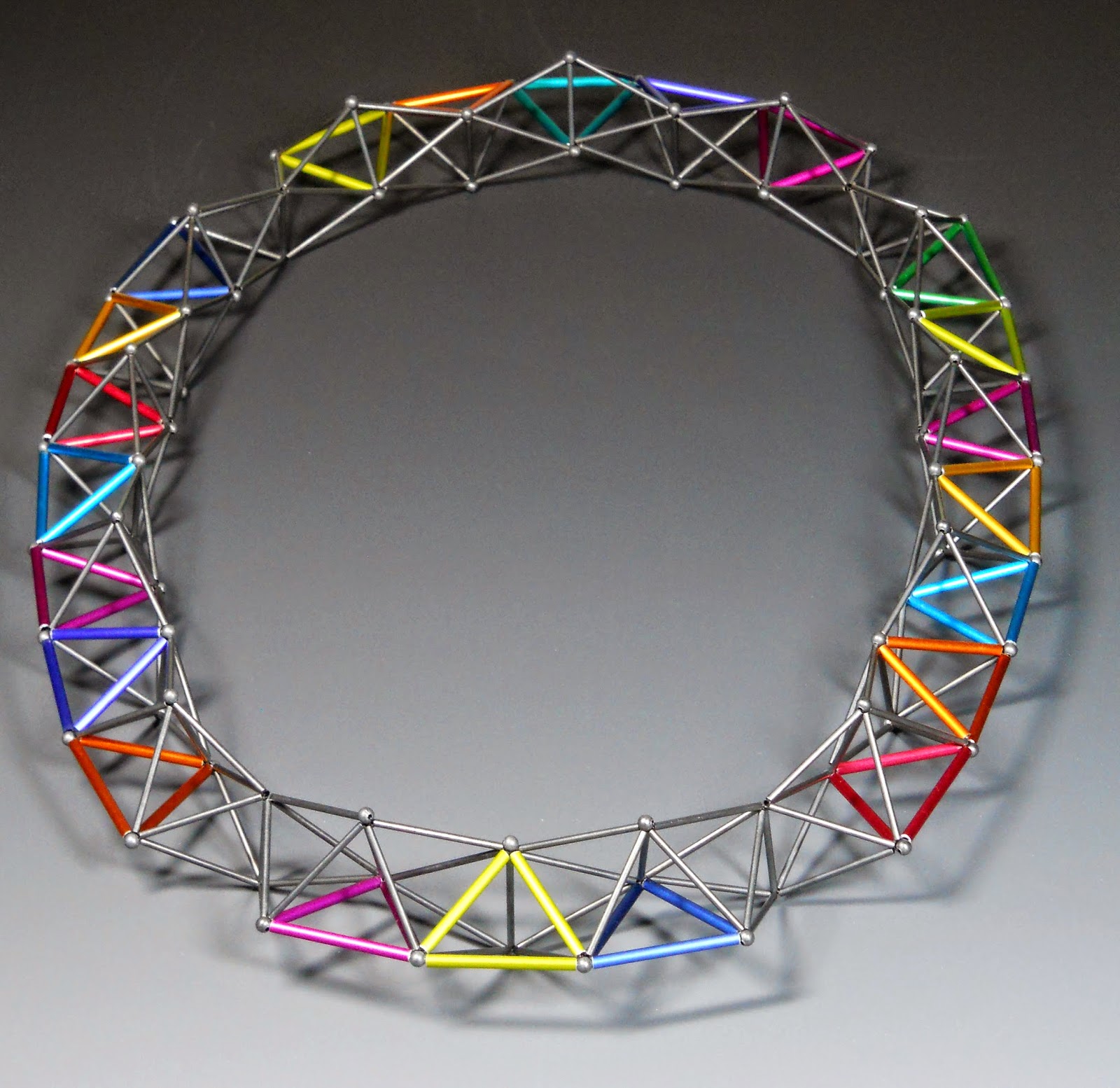 decided I wanted to do a necklace that would go over your head without needing a clasp, but I didn't want it to be too huge either. And the tubing is expensive enough that I can't just keep trying different lengths till I get what I want.
I played around with coffee stirrer straws (top picture), using 50mm straws for 25mm tubes, 40mm straws for 20mm tubes etc, and could approximate things that way.  For the most part I'd like to stick with cutting my metal tubes in lengths of 5, 10, 15, 20mm etc.  Otherwise it's just too hard to keep track of things.  But for a given piece I can always pick one element (like the tube on the very outside) and make it whatever I need to make the shape come out right.  Anyway, I'm still learning, still having fun.
Posted by Emilie at 1:25 PM No comments: