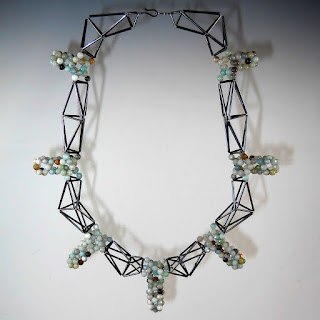 I've been thinking about the fact that I've been working with 2 different structures lately.  With the round gemstone beads I work with a system based on hexagons that is the outgrowth of what I learned from the Beaded Molecules blog.  Then I have another set of shapes based on triangles that I use with the silver tube beads.  I really like the openness of the tube structures, but it occurred to me that I could accentuate the not-there-ness of the tubes by having areas of more there-ness using gemstone beads.  I've done that in several pieces by having structures of gemstones and having them interlock with other structures, made of tubes.  I've liked that, but I wanted to find a way to integrate them into a single structure that goes from tubes in triangles to stone beads in 6 bead circles (functionally hexagons) and back again.  This does that, and I think I'll do more along this line. 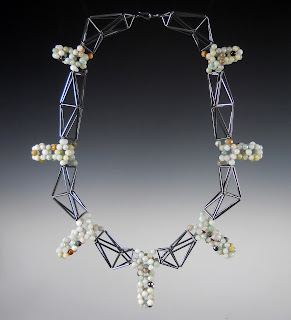 I've also been playing around with photography again.  This picture was done by hanging the necklace (with loops of monofilament line that I can then photoshop out) from a hoop of  steel cable with the background behind it but not touching it.  Here it's close enough that you still see the shadow of the piece on the background.  Can't decide if I like that.  I did it again with the background farther away, and that may be better.  I hadn't actually planned on putting that picture in the blog, but now that I've mentioned it I guess I will.  It's a more dramatic
picture, but for some reason I couldn't get it so that you could see the light aqua of the beads very well.  I think I need more light.
Posted by Emilie at 7:17 PM No comments: