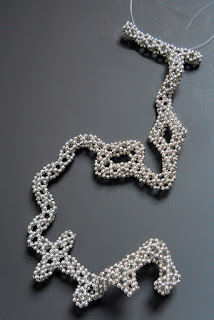 This is a piece I'm really proud of--even though it's not pretty, or something I can sell.  For a while now, I've been working on these tube pieces, and gradually finding what works and what doesn't.  The trouble is, I often try various ways to, for example, make a smooth curve, till I get what I want.  But some of the ones I didn't want might be a structure that's useful for something else--except that I've torn it out and after a while I can't remember how I did it.  So this is a sort of sampler.  In it I have several ways to make a 60, 120, and (most importantly) 90 degree turn.  The hardest was to make a corner, like you'd have if you were making an open cube.  The inside curve was easy, the the outside curve would either have a big knob on it, or be too flat and pull the inside out of its 90 degree-ness.  Anyway, I learned an enormous amount, and have generated lots of ideas for future pieces.
Posted by Emilie at 2:51 PM 2 comments: 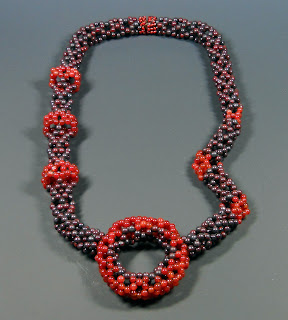 Since I've been doing these tube necklaces in nickel silver beads, I've wanted to use the same techniques in a piece made from gemstone beads.  This is the first one.  It's made from brecciated jasper beads (the dark ones) and red agate beads as accents.  I like the way the colors bring out the geometry of the piece.  Stone beads are a little slower to work with, because the holes are so small, but I like them, and will probably do more.  I used fireline for thread.  I mostly have been using monofilament nylon, for the extra body, but it's too bulky in these small holes, and I've found that if I make an extra pass all around the circumference as I end each round of hexagons, I get sufficient body.  By the way, I've experimented with different sizes of tubes, measured by the number of hexagons that make a "row", and for the most part I find a 4 hexagon circumference works well.  That's what I've used here.
Posted by Emilie at 6:07 PM No comments: