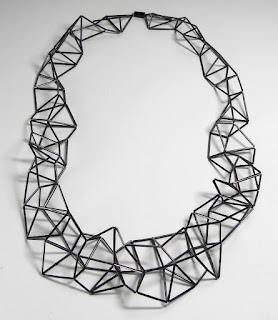 I think in my last post about beadwork, I said that since that piece was very controlled, I wanted to something funky next. Well, here it is. More and more, I've come to realize that I sort of have 2 distinct bodies of work, one very controlled, and one looser. I like them both, and they seem to resonate with different parts of me. I do the same with my rugs, although there I've moved more and more to the looser designs, with color families instead of single colors, and a more improvisational style. Partly as I get more confident with something, I loosen up a bit, although I still like the controlled pieces too. This necklace is a really simple right angle weave, done with oxidized copper tube beads. I used 2 different lengths of tubes, though, chosen mostly at random, which makes it asymmetrical, and gives it life (I think). I broke one of my rules with it though. I have come up with a general rule for my work that when I'm using round beads I generally create shapes out of polygons with at least 4 sides. I use triangles some, but generally I don't like the amount of thread that shows in a triangle. Mostly I use cubes, dodecahedrons, buckeyballs, etc. But with long beads, those sort of polygons don't hold their shape, so I stick to triangles, which are rigid. I mostly make things using tetrahedrons, octahedrons and sometimes icosahedrons, all of which are based on the triangle. This necklace is an exception to that rule, since most of it uses 4 sided shapes (I can't say squares because of the difference in the lengths of the tubes). If I had made it all with tubes of the same length, it would totally collapse. Because of the irregularity of the tube lengths, it can't quite collapse, and where it does collapse, it does so in interesting ways. At the back of the necklace, mostly to reduce the size, I changed it so that the cross-sections were triangles, and the sides were 4-sided, and it's a bit firmer there. Also at the bottom I added a second row with triangle cross-sections, both to create a focal area and to firm it up a bit. Still it's squishier than most of my work, but I kind of like the squishiness.
Posted by Emilie at 1:22 PM No comments: 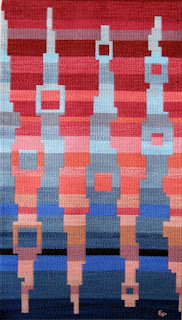 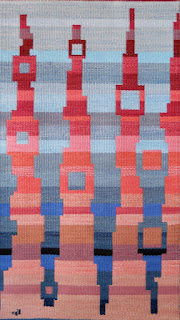 One of the fun things about the rugweaving structure I use is that the colors reverse on the back side. The design of my newest rug takes advantage of that to create a light side and a dark side of the rug. The darker side, where the reds and dark blues predominate, is the side I designed. On that side, the red sections get smaller as they go up, and they also get lighter as they go up, so you see more red and less pink. Same for the blues, which predominate at the top where they are dark and get smaller as they get lighter. On the back side the pinks and light blues predominate for the same reason. Either side can be the "right" side, depending on what works in your room.
Posted by Emilie at 7:51 PM 1 comment: 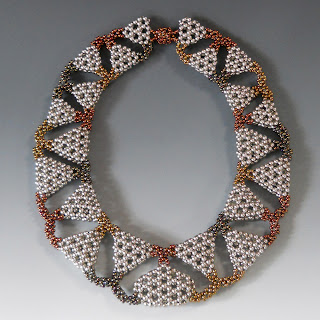 I thought that since I'd posted the early stages of the design of this piece, I ought to post the final product. Here it is. Once again simplicity and symmetry won out. To even things out, I'm working on a funkier piece next.
Posted by Emilie at 2:46 PM 8 comments: