Playing with an idea 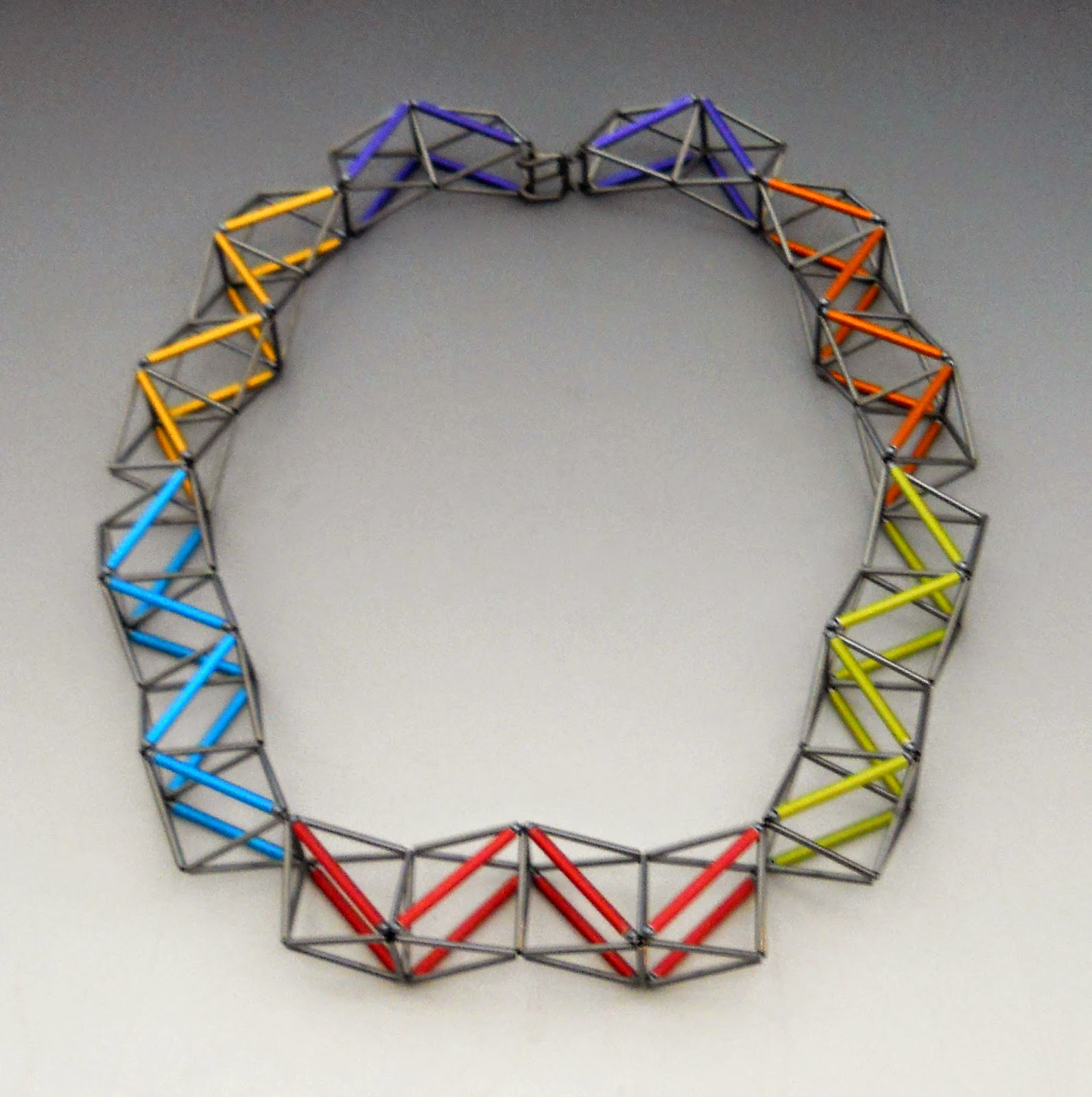 Still playing with my chains of squarish octahedrons.  The last one I did, and posted about, was not as deep (that is, not as 3 dimensional, not standing up as far off the body) as most of my work.  The tubes to give it depth were 10 mm long.  Here I used more or less the same structure, but with tubes of 15 mm. They changed the geometry enough that once again the octs zigzag a bit, but that was fine here.
It had occurred to me that you could also use those tubes as hinges and join rows of octs just at those hinges.  So that was what I did here.
Then I started thinking of other beads I could use for the "waist" beads.  A while ago I had gotten strings and strings of marble beads on sale, and hadn't done a lot with them.  So I thought I'd try those.
I had 2 sizes, 35mm long and 30 mm long.  I tried the larger ones first and got the structure you see here.  The ends of the marble beads were pretty wide, so I added a bronze colored bead to give a narrower end.  It came out quite zigzaggy, which I liked.  But the 35mm beads were awfully heavy, a 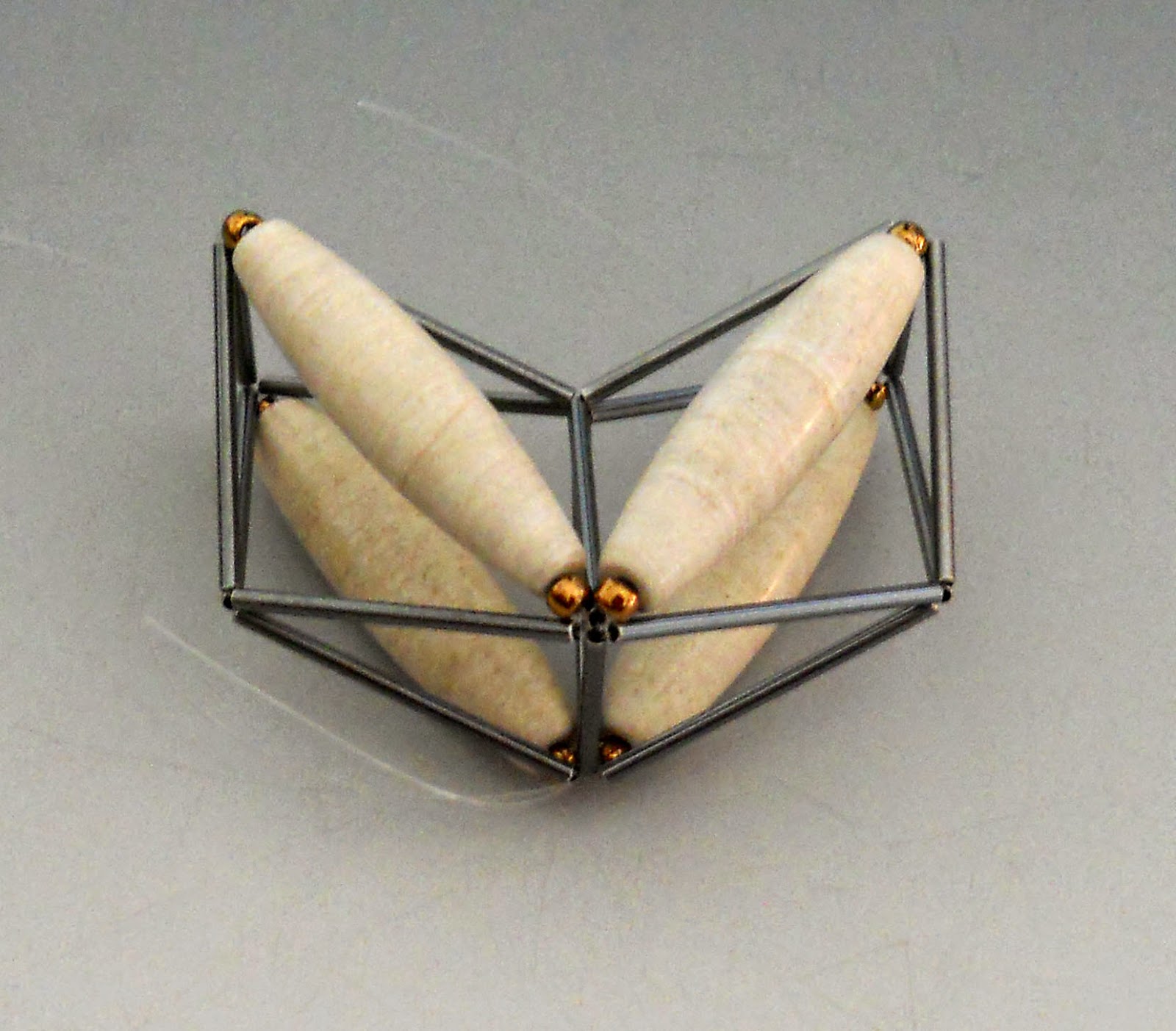 and I was afraid if I made a whole necklace like that it would be uncomfortable. 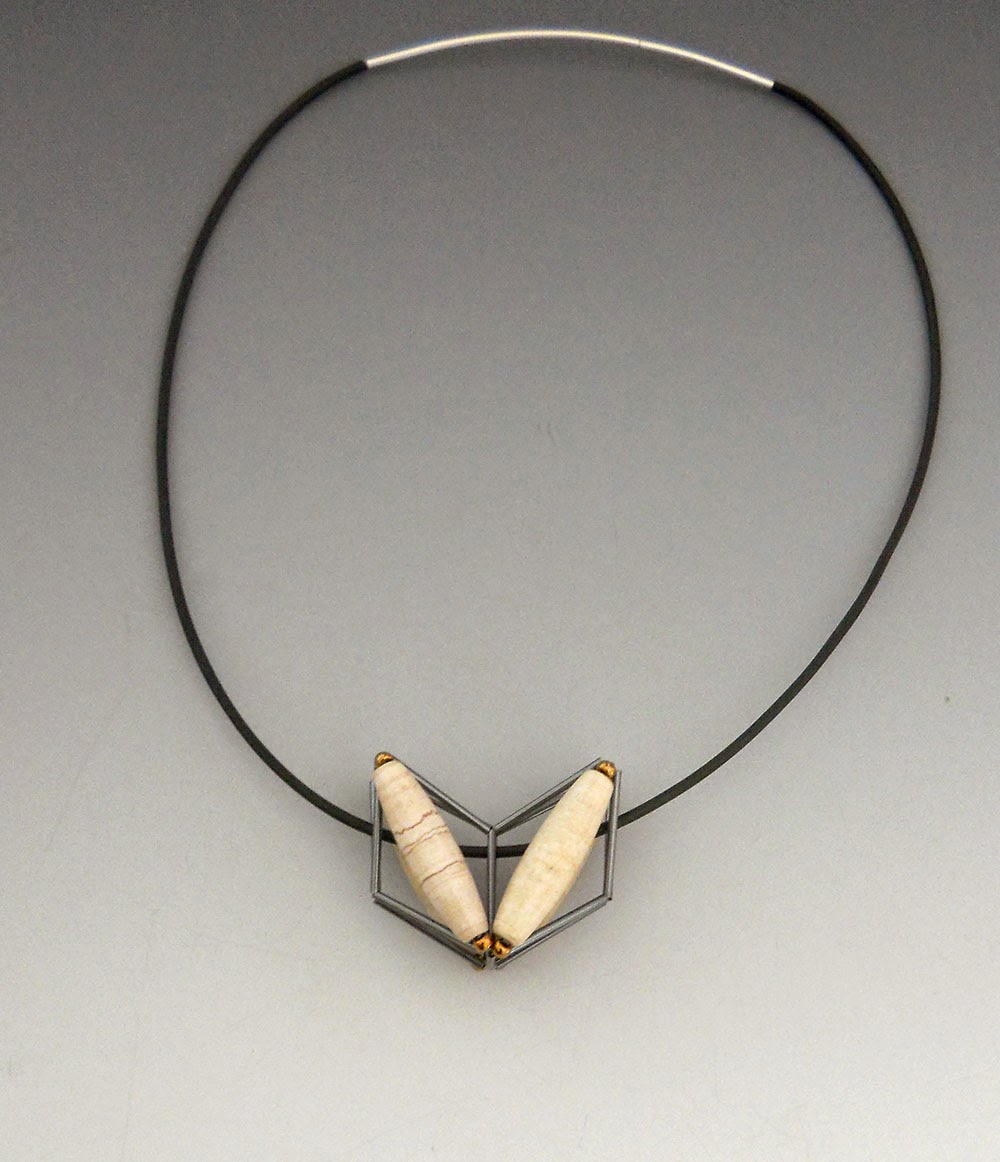 I tried using the 30mm marble beads, and to keep more or less the same proportions, I changed the silver tubes from 25mm to 20mm.  The next picture shows that one.  I liked it, but somehow didn't decide to do a whole necklace like that.  But I thought that  single one made a great pendant, so I just finished off the one, and I'm putting that on etsy.


What I finally ended up with was using the smaller (30mm) marble beads, and 25mm silver tubes.  That made each oct more 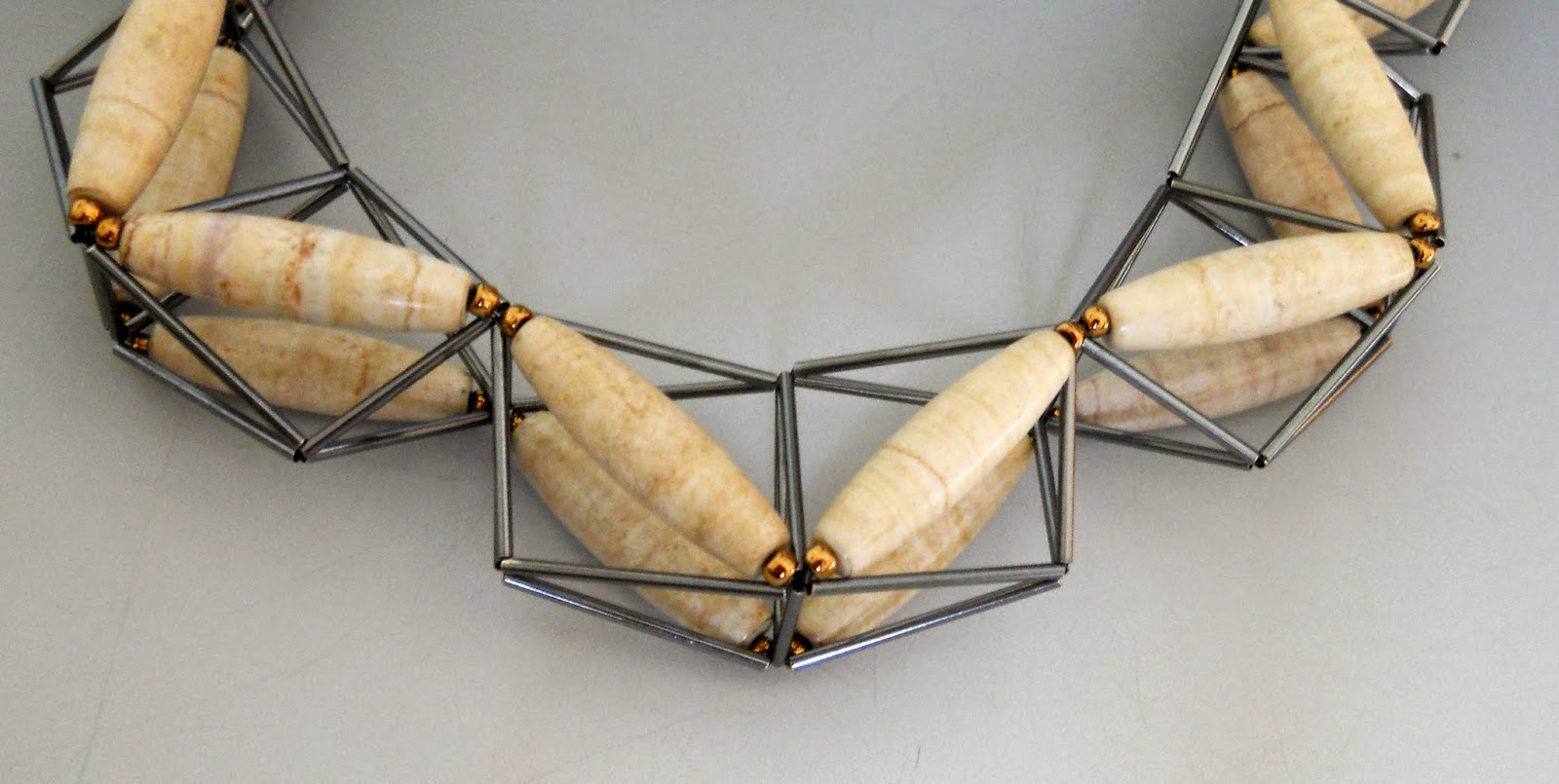 square, so I changed the 2 tubes on each outside face  to 20mm ones, and got just enough curve.  It's not quite finished, but here's a preview.  Each 2-oct structure is 2" long, so I'll have 9 of them hinged together.
The fun part of all this is to take an idea and watch it evolve, and see what you can do with it.
Posted by Emilie at 8:11 PM 1 comment: 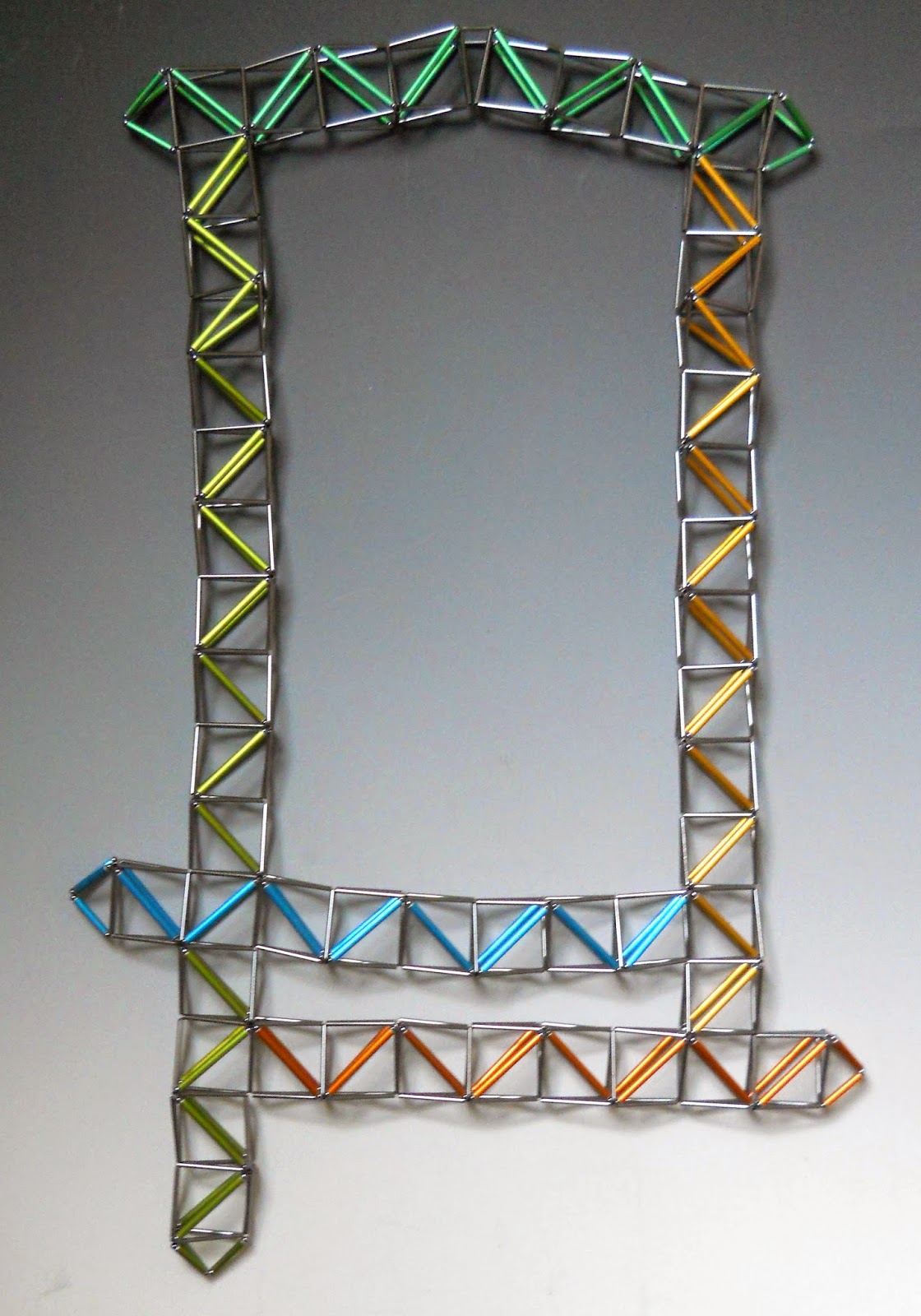 This is sort of a follow up on a post I did in January.  In that post I showed and talked about a necklace I had made in which I built octahedrons sized so that adjoining faces were almost at right angles to one another.  Each oct had a "waist" made of 2 short ( 10mm) tubes and 2 long gold filled tubes.  The angles weren't quite right angles because the 25mm gold filled tubes weren't quite long enough to be hypotenuses.  That would have required tubes of about 27mm, and I like to use stock sizes where I can.  So  on the sides of the piece the octs zigzagged a bit.
In that post I mentioned wanting to use this idea to make a piece that was something on the order of a tic-tac-toe grid.  When I started to do it with the zigzagging rows of octs, I found that the intersecting rows weren't quite at right angles to one another.  To get that, I really did need octs that had right angles between their faces, so using the same 20 mm beads on the non-waist edges, I really did need 27mm waist tubes.
It turns out the perfect solution was to use a 25mm tube with  a #11 seed bead at each end.  I wanted to use my anodised aluminum tubes instead of the gold filled ones, so that each chain of octs would have a different color, and I've found that with the aluminum tubes I'm pretty much always happier if I put a seed bead at each end of the tube.  That's because the aluminum tubes are quite a bit fatter than the silver ones, and so the open hole at each end of the tube is unattractive.  The addition of the seed beads solved both problems.
Posted by Emilie at 6:18 PM No comments: 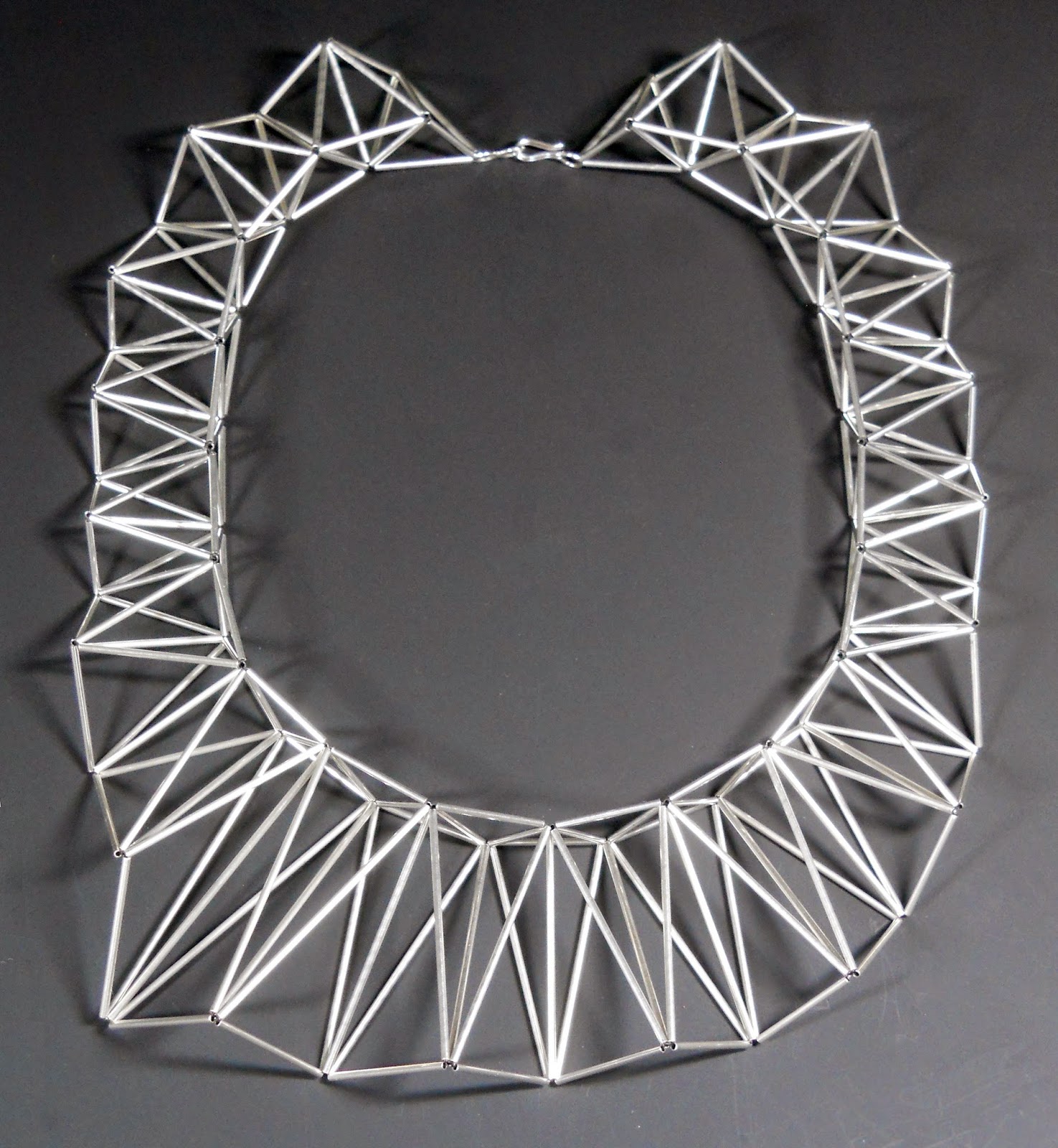 Seems to me that I have a way of announcing in a blog post that I plan to do A and then immediately doing B.  Like I'll say I want to get away from symmetry and the next thing I know I've done 3 or 4 symmetrical pieces. Or vice versa. Just a few posts ago I said I wanted to make pieces using sort of stock lengths of tubing instead of cutting custom lengths for an individual piece, because if I get the geometry wrong, I'm left with odd length pieces that don't work and that could  produce a lot of waste. So what did I do next but make the most custom length piece I've made so far.  I'm sure there's a CAD-CAM program out there that could have figured out the proper lengths for me, but, of course, I don't have one.  For this one I drew the inside oval and the outside asymmetrical curve on graph paper, and then drew the triangles it would take to join them.  This gave me an approximation of the lengths I would need, but only that.  Beyond that it was pretty seat-of-the-pants. I've been mostly oxidizing my silver so I don't have to think about tarnish, but for this one I had no choice but to use bright silver, because I was cutting 2 or 3 lengths at a time, and there's no sensible way to oxidize the tubes that way. (If I were still working with copper, I could oxidize as I go, because copper doesn't need hot water to oxidize, but for silver you need very hot water, close to boiling.  I guess I could keep a liver of sulphur bath hot if I used a hot plate, but I just use a pot with a coil immersed in the water, so I can only heat plain water, and when it starts to cool I throw the bath out.) Also if I oxidized a tube and then had to shorten it a bit,I'd be left with 1 bright edge, and I'd have to oxidize it again.  Anyway, I like this one in bright silver anyway, so it worked out alright.  the longest tubes in it, by the way are 62 mm, or around 2.5" long.
Posted by Emilie at 10:35 AM No comments: