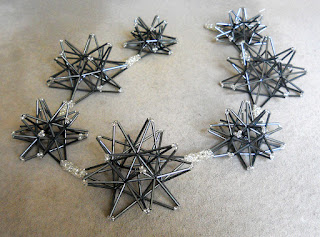 On my recent boat trip, I was playing around with  some new ideas.  One of them was stellations.  I made an ornament by making an icosahedron and stellating it by turning each triangle into a tetrahedron.  I liked it, but as it was almost 3" in diameter it wasn't very practical as jewelry.  Then something occurred to me. The icosahedron at the center of it was made up of groups of 5 triangles that formed pentagons coming to a point at the center.  If I took one of those groups of triangles, and made it point inward instead of outward, I'd have a flat side that could lay against the body.  Then I could stellate all the rest of the triangles.  Voila!  Of course, these star forms still extend out quite a ways from the body, but I kind of like that.  I also made a few where the 5 tetrahedrons at the center of the star are made from shorter tubes, and so don't stick out so far, but for the big necklace I decided to stick with the long tubes.
Posted by Emilie at 11:08 AM No comments: