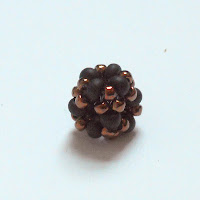 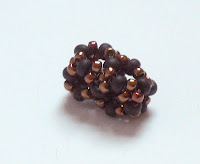 I did 2 different structures trying to "cubify" Gwen Fisher's super RAW.  I didn't have access to the her blog as I was doing them, which is good, because It turned out that neither is the structure she used.  I wanted to keep the octagon in alternating colors that her flat version has.  What I ended up with is according to my handy wikipedia list of Archimedean solids, a truncated cube (i.e.a cube with the corners cut off to form triangles at the corners)  I did a single version and a double.  One thing I remembered about Gwen's version, though, is that it had hexagons at the corners, and this one has triangles.  So I tried again.  That's picture #3, and in the Archimedean solids it's a truncated cuboctahedron.  The funny thing is that it's actually the same bead I did several posts ago, and I called it Gwen's bead, because O it's relationship with something that I can't now remember.  I'll have to go back to those posts and look, but meanwhile I seem to have arrived at the same bead, approaching from 2 different directions. 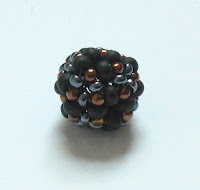 It was the different arrangements of the colors that made me not initially recognise the structure I saw.  Similarly it was the different color arrangements that made me not recognise the structure that Gwen had actually made for her CSRAW  (maybe we should call it super cubic right angle weave, because SCRAW is alot more pronounceable than CSRAW).  Anyway her structure is a truncated octahedron, which is one of my favorite shapes because you can incorporate a round(ish) structure with RAW.  I usually do it in a single color, and so I didn't recognise it.
It occurs to me that one reason I usually do structures in a single color dates back to my learning to weave them.  I learned both the Plato bead (dodecahedron) and Archimedes bead (truncated icosahedron) from Valerie Hector's book.  I had, of course, no idea at the time how the names Plato and Archimedes were related to the shapes.  Anyway, the Archimedes bead took me a while and I had to do it in 2 colors in order to keep track of what I was doing.  I felt like it was a personal milestone when I got to where I could keep track of it without the "crutch" of 2 colors.  Now I'm starting to realize that the color arrangements can enhance the pieces.  Hmm...some rethinking may be in order. 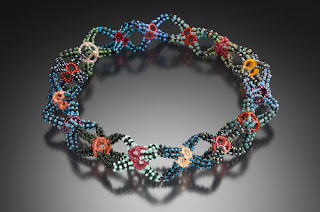 One of my favorite uses of the truncated octahedron (clearly we need a shorter name) is, in fact, analogous to what Gwen's molecule did in her last post.  It's a series of necklaces that I call my Garland series.  This is my favorite of them.  It's the interesting angles as which the RAW sections come off the spheres that makes them interesting. 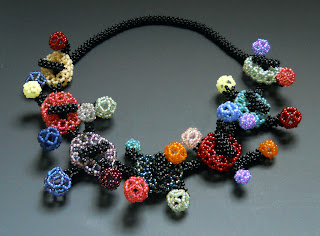 With this piece I've gone back to my "links" series, creating separate links that can be joined together in any order. These are embellished with balls on stalks. One thing that is different in this one, and that I like, is that I used a black stem and toggle to contrast with the colored oval in each link. I considered using a colored ball at the end of each stem instead of a straight toggle, but then you can't take the links apart. Still, it would have looked nice, and blended in with the other balls on stalks. Hmmm... I'm thinking as I write, and that might be the next piece. I did that once before, with a gemstone links piece, and liked it. I don't think that piece is here on the blog anywhere, but it's on my website, eprugweaver.com/beadwork. I had to make one of the ovals open up (with a magnet clasp), since I couldn't take the links apart from one another.

The other thing I wanted to mention is that I've been working pretty hard on my photography, and I thought this one came out pretty well.
Posted by Emilie at 8:21 AM No comments: