This is sort of an add-on to my post earlier today.  I have a couple of local art festivals coming up, so I may not do any blogging for a few weeks.  So I thought I'd take a quick picture of the straight, but spiraled string of tetrahedrons I came up with.  I think it's kind of cool.
By the way, thinking of festivals, if anyone will be in the Chicago area, I'll be showing my jewelry at the Highland Park (northern suburb) Festival of Fine Craft the last weekend in June.
Posted by Emilie at 5:25 PM No comments: 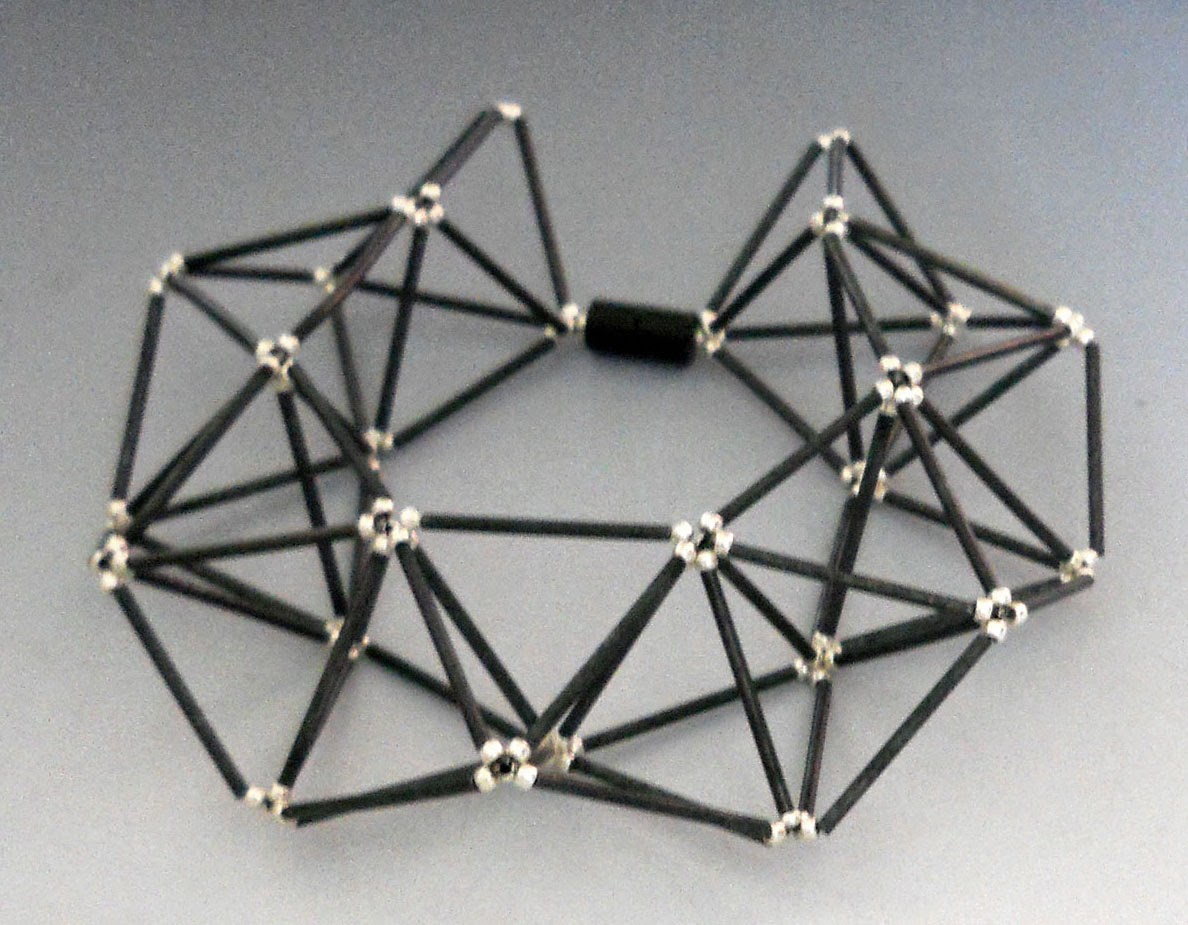 First of--apologies for the blurry pictures; I didn't haul out the tripod as I should have.
I've been playing with structures of tetrahedrons again.  Last September I did a post or 2 about some necklaces I made using really long bugle beads to form chains of tetrahedrons (tets).  I liked them but got concerned about the sharpness of the edges of the bugle beads.  Even adding a seed bead at the end of each bugle, I was a bit worried about the fireline fraying.  I decided not to use magnet clasps because I didn't like to be pulling the necklace apart as you do with a magnet clasp, for fear of cutting a thread. 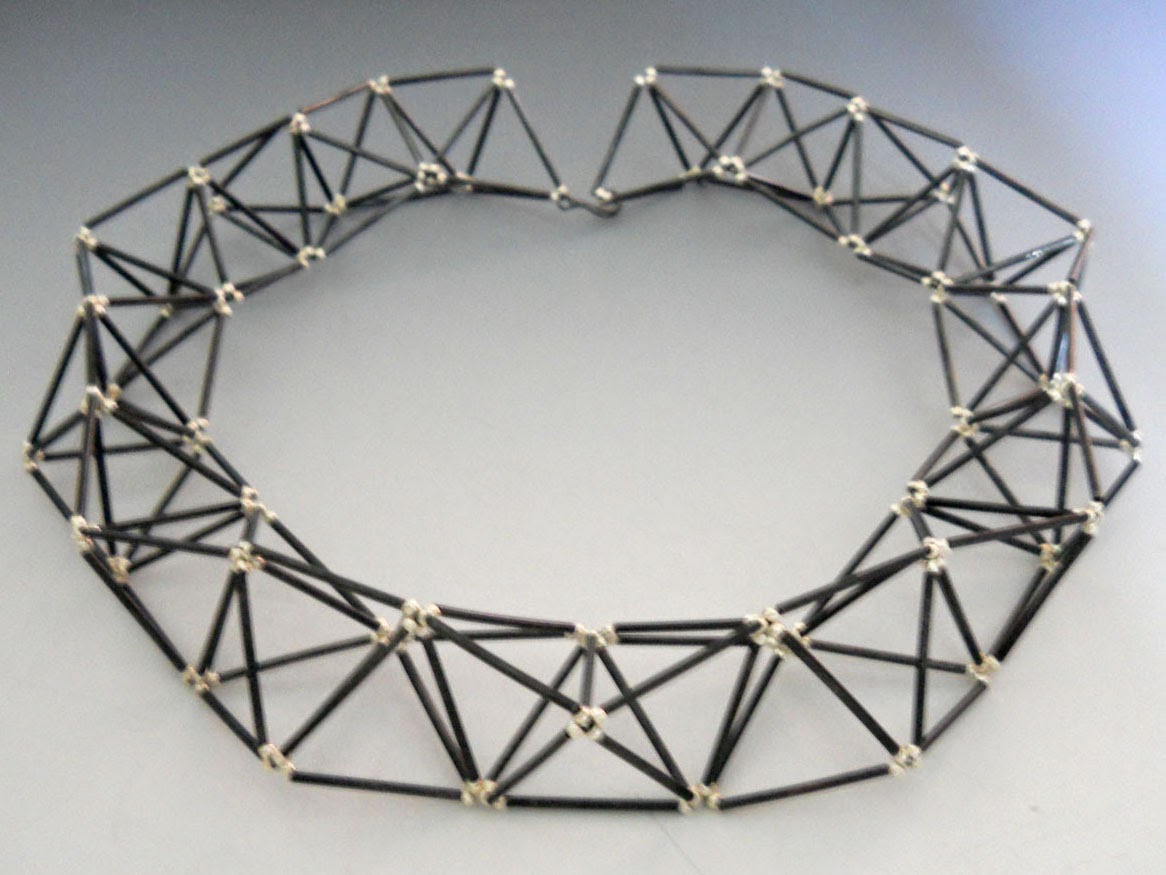 Anyway, I started in again, but this time using the oxidized copper tubes I've been using lately.  If you just keep adding tets in the most logical order they make a circle.  I think ( if anyone knows for sure, I'd love corroboration or correction)  that tetrahedrons will tile infinitely in space with no gaps the same way that cubes will.  But they do it in a very curvilinear way.  For example, 20 tets form an icosahedron, which is essentially spherical.  Still, if they'll tile in 3 dimensions, there had to be a chain of tets that would curve  gradually, or even go straight.  But I was having a hard time getting a chain of tets that had a shallow enough curve.  The chain I had used with the 30mm bugles last fall, didn't work with my 22 mm tubes.  The curve was too tight, and I ended up turning it into a bracelet instead of a necklace.
I spent lots of time coming up with the second structure.  I found a chain of 8 tetrahedrons which didn't bend much.  Then I marked the last tet with a piece of yarn and started adding tets to the chain so that that marked tet was the center of a symmetrical chain of 15 tets.  Then I moved the yarn and extended the 15 tet chain to 29.  I'm sure there are computer designing programs that would figure out something like this for you, but I'll admit I learned alot using this seat of the pants method.  And I got a chain that curved just the right amount.  I've even found a chain that goes straight.  It makes a gentle spiral as it goes, so it's pretty cool.  I don't have a picture of it yet, but I'll post one when I do.  All in all, it was a fun endeavor.
Posted by Emilie at 2:34 PM 1 comment: 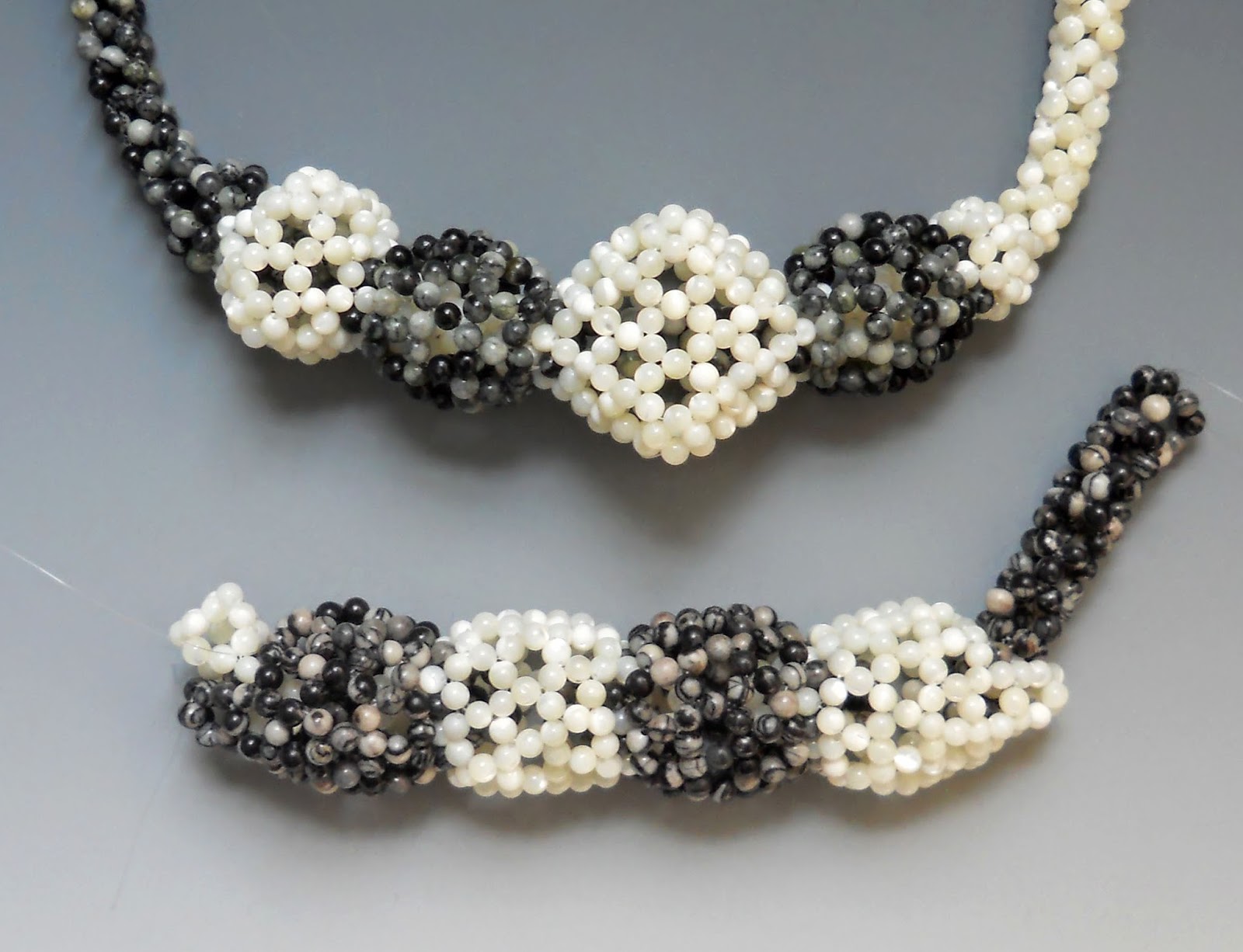 I'm still playing around with shapes that overlap/intersect one another.  I thought I'd try black(ish) and white so that you could see the intersection better.  The white beads are mother of pearl; the black are jungle jasper in the top one and black silkstone in the bottom one.  Neither is quite finished as I ran out of mother of pearl beads and I'm waiting for more.  In the top piece there's a continuous black tube that goes sometimes inside of and sometimes outside of a continuous white tube.  In the bottom there are 4 "pod" shapes with pointy ends that overlap, and tubes on each end that overlap the last pod.  An interesting project.  The design limitation is you have to arrange them so that the circles where the 2 shapes interlock have to all be 6-bead circles, because a smaller circle won't let a bead pass through the middle.  If I had beads that were slightly oval shaped, so that a bead would pass through a 5-bead circle, I'd have more flexibility.  Also, it makes for a pretty rigid structure.  I'd thought I could make a whole necklace of interlocked pods, but it just doesn't curve enough.  As it turns out, it would also be pretty heavy.
Posted by Emilie at 3:01 PM No comments: