some new bracelets, and a technical advance 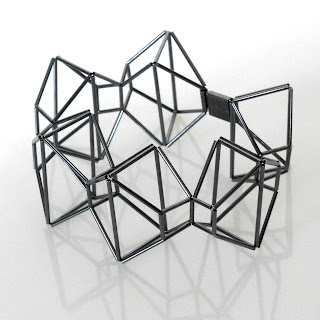 Just finished some new bracelets, and I like them a lot.  It also provided a start of a solution to a technical problem I've had with bracelets.
Up until recently, I have sort of avoided bracelets for several reasons.  One is that I don't wear them myself.  Like most everyone else, I start out by making something for myself, and I've just never been a bracelet wearer.  The second was the lack of a good clasp.I've written about this before, but I've finally found 2 clasps that work for me and don't use up too much of the bracelet length. 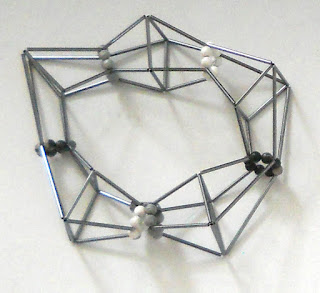 It still left the major problem with bracelets--they have a very narrow range of usable lengths.  The difference between a 7" bracelet and an 8" one is pretty big.  When you are making modular structures, as I usually am, if you come out too short, you can't just add another module, or you'll be much too big.  Over time I've found out that 10 modules using 20mm lengths or 6 modules using 28mm lengths make a workable length when a short clasp is added.
Now about the bracelets shown here--it started with the idea of a common Brancusi structure which is column with a square cross section that alternates small and bigger waists.  He did that a often and I wanted to reproduce in in a RAW structure.  My first attempt failed, because since my structures aren't rigid the way a wooden column is, they tend to straighten out on one side or another unless you exaggerate the in-and-out-ness quite a bit.  As you can see, the top bracelet is more exaggerated than the bottom one, but both of them work pretty well.  What I discovered, though, and thought was pretty cool, was that because of the zigzaging in and out on the inside of the bracelet, which is there when not stressed, but can go away if you push on it, the bracelet fits comfortably on a small wrist, but will also accommodate a larger wrist by straightening out the zigzag.  The outside distorts to allow that, but it looks fine either way.  Pretty cool. 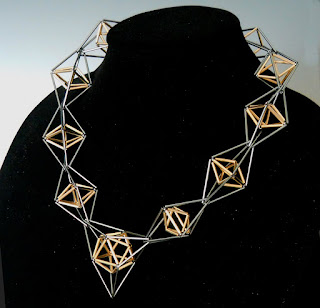 I thought I'd do a post of what I've been up to lately.  Another piece where individual structures are interlinked to form a chain. For each link, I made an octahedron out of gold filled tubes, then added 8 long oxidized silver tubes to form another octahedron on the outside of it.  It took a while to get it right because so many tubes were ending at the same place.  Eventually I added a small round silver bead to separate the outer oct from the inner one, and that seemed to make it work.
The other thing I've been working on this summer is getting my work into galleries.  I traveled around and talked to places, and I've gotten a few new ones, so if you're in any of these areas, I hope you'll stop by and take a look:
Albuquerque--Mariposa Gallery, 3500 Central Ave, mariposa-gallery.com
New Orleans--Ariodante Gallery, 535 Julia St, ariodantegallery.com
Chicago--Pistachios, 55 E Grand Ave, pistachiosonline.com
Posted by Emilie at 6:06 PM No comments: