Well, I'm still hanging around the house and making jewelry (no surprise).  It's all going onto a shelf, since galleries are mostly closed or only partially open.  I found out recently that I've been accepted into the Philadelphia Museum of Art Craft Show this coming November, and I'm pretty excited about that, but, of course, it may not happen, or it may become a virtual show.  We'll see.The first picture shows 2 more pieces in the series I talked about in April, with a series of triangles in the center that form the base of tetrahedrons.  For these 2 I wanted to make that base have an inward slant to it by making the top tubes shorter than the bottom ones.  These will be brooches. I also wanted to try 2 different ways of creating asymmetry. The one on the left has asymmetry in the shape of the star.  The one on the right has a symmetrical shape, but asymmetry in the placing of the gold tubes.  Myself, I prefer the one on the left, but we'll see what customers think. 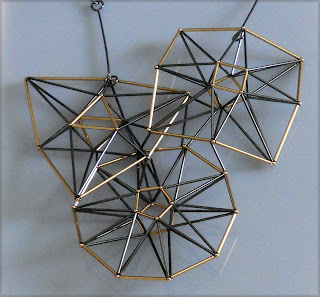 The second picture is something I did with some of the shapes I initially made in trying this structure.  In my April post I showed a picture of several of them.  My intent was to hang each one on a chain as a pendant.  But till I got around to it I just had them all in a pile.  I saw these 3 piled together, and decided I liked them that way, and wanted to join them into a single pendant.  I wasn't sure how to do it so I've been staring at the group of 3 arranged like this for several weeks.  Yesterday I decided it was time to wade in and join them together.  I like the way it worked out, and it means that instead of 3 nice pendants, I have one that I think is way more interesting.