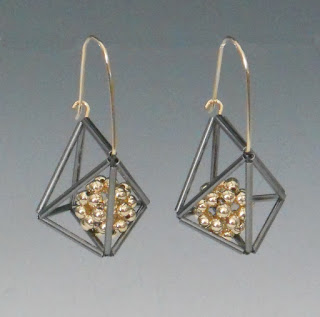 I've been working on pieces, mostly earrings, where there's a "cage" made from oxidized sterling silver tubes. Then another structure, usually a sphere of sorts floats freely inside that cage.  I've done spheres of 4 mm gemstone beads, but my favorite, and my best selling one is a dodecahedron (sometimes called a Plato bead because it's a Platonic solid) made from 3 mm gold filled beads.  Lately, though, I've wanted to make a shape that wouldn't stay so much inside the cage, but would hang out more.  I thought what I wanted would be a stellated structure with different points hanging out of different triangles in the cage.  But I found I didn't like those.  The problem was using my gold filled tubes to make a stellated structure.  The gold filled tubes are a bit bigger in diameter, around 1.8 mm, and when you make a stellated structure that's small enough for an earring using tubes that fat, it just looks kind of clunky.  I had thought of using just a cube, which doesn't require 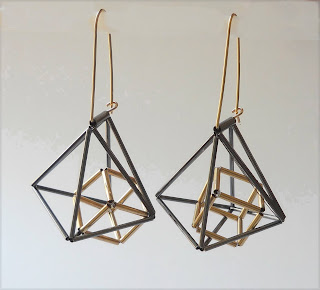 so many short tubes and doesn't have such acute angles.  But a cube, since it isn't made from triangles, isn't rigid the way something like a stellated tetrahedron would be.  However, I found that if I made a cube using my stiffest 10 lb test monofilament, and went around each of the square faces an extra time, the cube came out almost as stiff as something made from squares.  And since it's just floating, and so has no strain on it, it turned out to work just fine.  I love the asymmetry it gives to each earring.